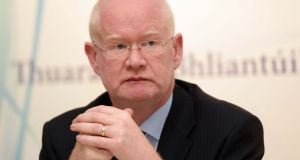 Revenue chairman Niall Cody reiterated to an Oireachtas committee the stance that it does not make special deals with any company. File photograph: Eric Luke/The Irish Times

Appearing before the Oireachtas Committee of Public Accounts on Thursday, the head of the State’s tax collection agency reiterated the stance that it does not make special deals with any company.

Asked by Sinn Féin TD David Cullinane if sworn testimony given by Apple chief executive Mr Cook to a 2013 US Senate hearing that the tech giant came to a “tax incentive arrangement” with Ireland in the 1980s was factual, Mr Cody said the statement was “absolutely not correct” and “wrong”.

“If we have the head of Revenue who is saying that Tim Cook gave false information, or incorrect information . . . to a Senate hearing, that is very, very serious,” said Mr Cullinane.

On the subject of the European Commission judgment that Ireland is liable to recover €13 billion of back taxes which Apple allegedly avoided through a system of illegal State aid, Mr Cody reiterated the stance that Irish tax laws were “absolutely” complied with in Revenue’s calculations.

“The profits of non-resident companies that aren’t generated in Ireland can’t be charged here under Irish tax law,” he said.

Nevertheless, he indicated that the process of calculating the exact amount owed by Apple should the judgment be acted upon had already begun and that, pending the outcome of an appeal, all money owed would be collected as requested by the commission.

Over the course of a wide-ranging meeting, Mr Cody said fuel laundering had now been “practically eliminated” in the State, and that Revenue was examining cross-border customs systems in countries such as Norway and Turkey to inform Ireland’s post-Brexit approach to Border controls.

There were 1,000 recorded cases of toxic waste dumping associated with fuel laundering between 2008 and 2015 according to Revenue, and although such activities “escalated” after 2011 because of new EU environmental regulations the practice had now been more-or-less extinguished.

This was aided by the recent introduction of a new coloured marker to Irish and UK diesel, said Mr Cody, and a series of random fuel- tank inspections conducted by Revenue earlier this year did not pick up any byproducts of laundering.

However, he stressed that the sale of laundered fuel imported from Northern Ireland continued to pose challenges, as did cross-Border smuggling of counterfeit cigarettes and alcohol.

Amid anxiety over a return of the hard Border post-Brexit, Mr Cody indicated that Ireland may elect to pursue a system encompassing some degree of cross-Border checking but with no trade tariffs.

1 Should my mam wait for house prices to drop before buying?
2 ‘The recovery needs to be a full-scale economic renewal’
3 Citigroup warns that markets are out of step with reality
4 Chris Johns: Past is another country when it comes to our post-pandemic future
5 US ‘hard seltzer’ drink White Claw launches in Ireland
6 Michael Smurfit: ‘I asked Trump to invite me to the White House for my 80th birthday’
7 Donohoe told insurers they risked ‘irreparable damage’ to reputation
8 ‘I’m so lucky to be in the Caribbean – a million miles from Derry Girls’
9 Charlie Chawke plans 290 apartments and hotel on Goat pub site
10 Tobacco makers still trying to make a mint from Irish menthol market
Real news has value SUBSCRIBE