One-fifth of board positions globally now held by women 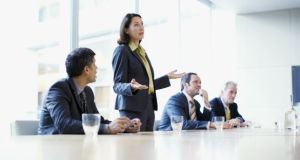 Europe leads the way with 29.7 per cent of positions on boards held by women

The percentage of women on company boards globally has doubled since the start of the decade, but while Europe leads in this, it lags North America and Asia in addressing gender diversity at management level.

One-fifth of supervisory board positions are now held by women, according to a study from the Credit Suisse Research Institute. Its report shows the percentage of women on boards worldwide now stands at 20.6 per cent, up from 15.3 per cent since 2015.

The research highlights significant differences across geographies with Europe leading the way with 29.7 per cent of positions on boards held by women, up from 22.5 per cent in 2015. In contrast, the percentage of women on boards in Japan is just 5.7 per cent.

North America has seen the most significant improvements without the use of formal regulatory pressure in recent years, with board representation jumping to 24.7 per cent from 17.3 per cent in 2015.

In Asia-Pacific (excluding Japan), 14.4 per cent of positions are held by women, up from 11.6 per cent three years ago. While lagging behind Europe and North America in terms of board representation, the region has the highest number of female chief executives and chief financial officers globally.

The report shows that the proportion of women in management generally increases as the percentage of women on boars rises, suggesting that the impact of greater diversity in the boardroom leads to a better balance in executive functions. But it adds that the existence of gender quotas and related policies in Europe has not led to a marked increase in women in C-suite roles, when compared to other regions.

No breakdown is provided for the Republic but a report from Chicago-headquartered executive search group Heidrick & Struggles published late last month, placed Irish public limited companies at the bottom of the pile across a selection of European countries in appointing women to their boards.

The study showed women accounted for 29 per cent of 34 boardroom seats filled across Irish Plcs in 2018, the lowest among seven countries monitored, including France, Germany, Britain, Netherlands, Portugal and Spain. The average stood at 38 per cent.