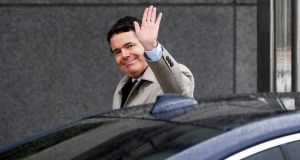 Minister for Finance Paschal Donohoe. Corporation tax for the first half of the year generated €1.9bn more than expected. Photograph: EPA

The Government’s budget deficit swelled to €5.3 billion in June as spending on health and income supports related to the Covid-19 pandemic soared.

This compared with a surplus of €260 million for the same period last year.

However, the latest half-year exchequer returns show an unexpected increase in the amount of corporation tax collected, which offset declines in other tax heads.

The tax generated €5.9 billion in the six months to the end of June, €1.9 billion, or 48 per cent, more than the Department of Finance had expected.

The Government also benefitted during this period from a €2 billion transfer from the National Asset Management Agency (Nama), the first half of the expected surplus from the agency.

The figures show the year-on-year deterioration in the headline deficit was driven by a large increase in Government spending, which rose 20 per cent above its original target to nearly €32 billion in June.

This reflected rises in health and social protection spending as a result of the pandemic.

Social protection spending was €4.1 billion above profile, reflecting the Government’s income support schemes, while health spending was €1.2 billion ahead of target.

Overall, the half-year returns show the Government took in €26.8 billion in taxes during the six-month period, up marginally on last year.

With consumer activity restricted to curtail coronavirus, VAT generated during the period was down €1.5 billion, or 20 per cent, on last year, at €5.9 billion.

Income tax, the Government’s largest tax channel, collected during the six-month period came in at €10.5 billion, which was slightly ahead of the amount collected at this stage last year. However, the June figure for income tax was 21 per cent, or €368 million, down on the same month in 2019.

Commenting on the figures, Minister for Finance Paschal Donohoe said the Government was on course to run a deficit of €23 to €30 billion this year, as outlined in the Stability Programme Update in April.

“A deficit of this scale is extraordinary, but we should continue on to the next phase of our response to this crisis,” he said.

“The Government is currently working on a fiscal stimulus plan that will – first and foremost – get people back to work,” Mr Donohoe said. “A package of measures will be introduced that will build on existing measures in order to help kickstart the economy, safeguard jobs and protect people’s livelihoods.”

Goodbody economist Dermot O’Leary said the surge in corporate tax revenue continues to cushion the blow of the pandemic on the Irish public finances.

“The relatively small drop in Q2 income tax receipts is reflective of the very progressive nature of the Irish tax system and the sectoral impact of the lockdown,” he said.

“While there are clear concerns about the sustainability of corporation tax receipts at these levels into the medium term, they are a welcome boost this year, offsetting some of the collapse in VAT and increase in crisis-related spending, both of which are also seen to be temporary,” he added.

Peter Vale, tax partner with Grant Thornton Ireland, also noted that the drop in income tax was not as bad as many expected.

“As the economy starts to reopen, it now looks like the overall drop in income tax receipts for 2020 will be less than expected, with figures at this point almost identical to the 2019 equivalent, although almost certainly there will be a drop in the aggregate figure by year end,” he said.

“Next month will tell us if we can expect the same on the VAT front. However, it’s worth noting that VAT figures for the year to date have been hit hard and currently sit 20 per cent off the 2019 equivalent, with worse likely ahead,” he added.