ECB financial supervisor job likely to go to a woman 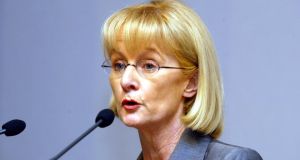 Daniele Nouy has worked at the Bank of France since 1974, was elected in 2006 as president of the Committee of European Banking Supervisors -- the predecessor of the European Banking Authority -- and is currently the secretary-general of the French Prudential Control Supervisory Authority. Photographer: Mark H. Milstein/ Bloomberg News.

Last-minute resumes sent to Mario Draghi for the European Central Bank’s new financial supervisor job are unlikely to feature many men. Ten months after Yves Mersch joined the ECB’s board in the wake of an outcry that its top management would become an all- male club, the next senior appointment needs to be a woman, said four euro-zone central bank officials.

The leading candidate is Daniele Nouy of the Bank of France, with resumes to manage the repair job on the euro region’s crisis-ravaged financial system and supervise its 130 biggest lenders set to arrive at the ECB president’s Frankfurt office with postmarks of no later than today. With memories of last year’s gender tussle coloring the race, European Parliament lawmakers say they’re ready for another clash if they don’t get their way.

“It’s almost a certainty that if a very good woman is put forward, all else being equal, the parliament will choose her,” said Sharon Bowles, chairwoman of the parliament’s Economic and Monetary Affairs Committee, who led protests over Mersch’s appointment last year and expects to scrutinise the ECB’s selection. “There are several in France, so we’re not short, and there are some in other countries.”

Officials including Luxembourg Prime Minister Jean-Claude Juncker previously identified Nouy, 63, as a leading candidate. She has worked at the Bank of France since 1974, was elected in 2006 as president of the Committee of European Banking Supervisors -- the predecessor of the European Banking Authority -- and is currently the secretary-general of the French Prudential Control Supervisory Authority. Nouy is “an obvious choice, and it suits their gender balance issue,” said Karel Lannoo, an analyst at the Centre for European Policy Studies, a Brussels-based research group. “Now that Janet Yellen’s been appointed to the Fed they will feel themselves even more stimulated to have much more of a gender balance.”

Yellen this month won the race to replace Ben S Bernanke, becoming the first woman to lead the Federal Reserve. Other women appointed to top central bank jobs this year include Elvira Nabiullina, who was named in June as Russia’s central bank chief. Yesterday, acting Bank of Israel Governor Karnit Flug was nominated for its top position.

Nouy may not face competition for the ECB job from two possible German rivals. Bundesbank vice president Sabine Lautenschlaeger, whom ECB board member Peter Praet said a year ago that he holds “in very high regard” for the role, won’t be available, according to a person with knowledge of her plans. Elke Koenig, who leads the regulator, Bafin, is unavailable, two people with knowledge of her plans said.

Even so, other candidates could emerge. All European Union citizens are eligible to apply, opening the race to possible contenders from non-euro area countries, such as Swedish Riksbank deputy governor Kerstin af Jochnick or Ingrid Bonde, the former chief of the country’s regulator. A Swede could offer the aura of a country with a well-capitalised banking system, untainted by association to any particular euro-area national interest when called upon to act as an umpire. “There’s a lot of rummaging around in the supervisory authorities to find suitable candidates,” Bowles said. “Obviously we are not going to have an all-woman shortlist -- well I doubt it -- although it would be interesting if we did.”

Bowles, a Briton who applied to replace Bank of England Governor Mervyn King before Mark Carney got the job, ruled herself out of the ECB race. “There are lots of people who thought I was going to apply, which I thought was quite amusing,” she said.

The ECB role is for a five-year non-renewable term. It was created as part of the transfer of powers over euro-area banks from national regulators, in reform measures to help address the region’s debt crisis. While the ECB has begun practical preparations -- bringing in seconded staff from national central banks and seeking premises -- it can start overseeing banks no sooner than one year after the final law is published. That is due imminently after EU finance ministers approved the legislation on October 15th.

Consulting firm Egon Zehnder International GmbH is helping the ECB find candidates, and a panel of policy makers and external advisers will draw up a shortlist for the Governing Council to pick one. The European Parliament will be informed on the composition of the pool of applicants and asked to approve the choice before European leaders make it official. “The European Parliament has good reasons from the standpoints of gender balance and respect for parliament to be peeved and unsatisfied with how things last went year,” said Nicolas Veron, an economist at Bruegel, a Brussels-based research group. “It has a right to claim a voice in this.” Mersch, the former governor of Luxembourg’s central bank, was nominated by governments for the ECB board last year and joined in December after months of wrangling over a job that fell vacant in May. The 754-seat parliament, whose opinion wasn’t binding, opposed his appointment with a vote of 325 to 300 with 49 abstentions in October.

If the ECB board’s six members serve their full terms, another vacancy won’t emerge until June 2018, when Vice President Vitor Constancio retires. ECB officials have already flagged the supervisor job as a chance to redress the gender imbalance, with board member Joerg Asmussen saying last year that it creates “a good opportunity” to do so. In the job ad, the ECB pledged that the hiring procedure “will respect the principles of gender balance, experience and qualification,” keeping open the possibility that

Draghi and officials could still pick an outstanding male candidate. “I don’t see any reason to exclude somebody because he’s a man,” said Sylvie Goulard, a French member of the European Parliament. “But when you want at a certain point to have a balanced team, of course you have to make a choice. We are in the 21st century and people no longer want all-male institutions.”