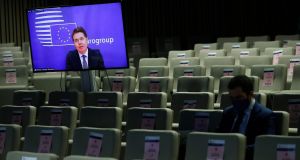 Eurogroup president Paschal Donohoe: brokering a deal on the reform is an early success for him. Photograph: Francisco Seco

European Union finance ministers reached a deal on Monday on a long-awaited reform of the bloc’s bailout fund with the aim of increasing economic stability in the single currency area.

The reform had been held up by heated political debate in Italy, where the so-called European Stability Mechanism (ESM) became deeply controversial due to its association with the austerity and loss of control over national finances of the bailout years, and there were concerns the reform could increase the probability of public debt restructuring.

The agreement widens the responsibilities of the ESM, an EU agency set up during the euro-zone debt crisis to give cheap loans to countries struggling to borrow on international markets. Finance ministers also agreed the fund could be used as an emergency backstop for the single currency area’s bank resolution fund from 2022, earlier than planned.

“This is a crucial stepping stone in our path to strengthen the banking union and it is an important complement to our efforts in supporting economic recovery,” Eurogroup president and finance minister Paschal Donohoe told reporters. The backstop “will help to ensure that a bank failure does not harm the broader economy or indeed cause financial instability”.

The reform is intended to make less likely a repeat of the debt crises that afflicted the weaker economies of the euro zone in the wake of the global financial crisis of 2007-2008, when rising borrowing costs threatened to send several countries into a debt spiral and default. The worsening economic outlook and increasing public debt levels caused by the coronavirus pandemic have increased momentum to strengthen the banking sector and economic resilience.

German finance minister Olaf Scholz said the changes would make less likely the kind of “contagion” seen in the euro zone crisis in which a lack of investor confidence spread crisis from one country to another, and would make European banks “more crisis-proof”.

“The ESM reform strengthens the euro and the entire European banking sector, because we are making the euro zone even more robust against attacks by speculators,” Mr Scholz said.

“A stable banking sector is an important prerequisite for growth and employment in Europe. At the same time, we are continuing to reduce the risks on bank balance sheets. All this is excellent and important news for our companies and for Europe’s citizens.”

Brokering a deal on the reform is a success for Mr Donohoe four months since he took over the presidency of the group of euro zone finance ministers. EU economy commissioner Paolo Gentiloni praised the preparatory work of Mr Donohoe’s predecessor, Portugal’s Mario Centeno, but told reporters that Mr Donohoe was “really a great contribution to this success” and that “without his steering, inclusiveness and commitment, this agreement would have been much more difficult”.

The agreement is due to be formally signed off in January, after which it will need to be ratified by EU member states.