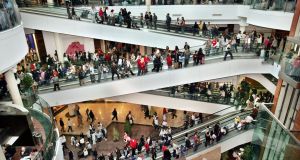 The Consumer Pulse was down on August’s near-record index, but was still up on the same time a year ago. Photograph: Matt Kavanagh

Bank of Ireland’s monthly Economic Pulse report, which measures sentiment in businesses and households, shows that consumers and companies were more cautious in September, ahead of the budget.

The bank said its monthly study of 2,000 businesses and 1,000 households showed “softer sentiment across the board”.

The Business Pulse was down for the second month running with a decline across all four categories, including industry, retail, services and construction. The bank said the results suggest “firms downgraded their assessment of the current jobs situation this month, and were generally more subdued about near-term prospects”.

“The UK’s decision to leave the EU continues to be a concern, with the majority of businesses – led by those in Connacht/Ulster – expecting it to have a negative impact on the local economy in their region over the next 12 months,” said Loretta O’Sullivan, the bank’s chief economist.

The Consumer Pulse was down on August’s near-record index, but was still up on the same time a year ago, the bank said. It said sentiment among households was “more muted” as consumers scaled back optimism about the economy.

“Paying bills and the tax burden, along with the cost of renting and rising house prices, topped the list of household concerns this month. Meanwhile, on the savings front, 69 per cent indicated that they are likely to put some money aside over the coming year,” said Ms O’Sullivan.

The Housing Pulse rose again, as the shortage of supply and increasing demand for properties continues to bite.

Regionally, sentiment was down among consumers and businesses across the State, with the exception of Munster.

The study is conducted each month in conjunction with the European Commission, and feeds into an EC Europe-wide index.