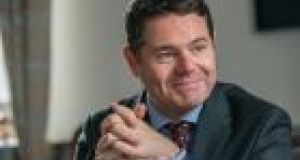 Nearly three-quarters of Irish business leaders responding to a survey want Minister for Finance Paschal Donohoe to widen the 20 per cent income tax band, while over half support the merging USC and PRSI.

Reducing the personal tax burden is a key priority for Irish businesses ahead of Budget 2018, with proposed changes to US tax law less of a concern.

In a survey of some 50 Irish business decisionmakers conducted by PwC, widening the 20 per cent income tax band emerged as a key priority for next Tuesday’s budget, with one-third of respondents looking for a reduction in the personal tax burden.

Of these, nearly three-quarters say Minister for Finance Paschal Donohoe should widen the 20 per cent income tax band, while more than half support the merging the universal social charge and PRSI.

It’s now expected that Mr Donohoe will opt for a combination of these two approaches.

Other priorities suggested by respondents are investing in roads, health services and faster broadband (22 per cent), dealing with the housing crisis (20 per cent), and boosting Ireland’s cost competitiveness (9 per cent).

On US tax reform, more than half (51 per cent) of survey respondents said that a potential significant US corporate tax rate cut would not impact on their businesses.

“When factoring in US State taxes on top of the federal rate, the US ‘corporate’ tax rate would still be double our 12.5 per cent corporate tax rate, which would still position Ireland well,” PwC head of tax Joe Tynan said, adding that US companies will always need to be close to the markets they serve and have access to key skills and a friendly business environment.

“In a post-Brexit world, Ireland will be the only English-speaking country in the EU, with access to over 500 million people. With over nine out of 10 Irish MNC leaders recently confirming that their investment in Ireland is a success, Ireland continues to be an attractive place to do business.”

According to the survey, Ireland’s potential loss of competitiveness is the greatest business concern arising from Brexit (36 per cent). Other concerns are pressure on margins due to sterling/euro exchange rate fluctuations (20 per cent) and the continued freedom of movement of people (16 per cent).