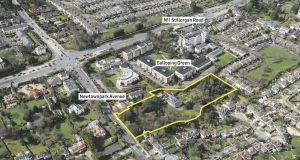 The property fronts on to the same road as Newpark Comprehensive School, but when redeveloped will not apparently be linked to the existing school.

The Department of Education has outbid several housebuilders to gain control of a large period house and nearly 3 acres of development land off Newtownpark Avenue in Blackrock, Co Dublin.

The Government department has sealed the deal by offering €8 million – €1 million more than the guide price – for Abilene, a large period house in need of modernisation but with elevated grounds extending to 1.19 hectares (2.94 aces).

The house has 50m of frontage on to the same road as Newpark Comprehensive School, but when redeveloped will not apparently be linked to the existing school.

A spokesman for the department recalled that following “nationwide demographic exercises” the Minister, Richard Bruton, had already announced plans to establish 42 new schools over the next four years.

“This new school announcement contributes to multiple school accommodation requirements in the south Dublin city area,” the spokesman said. “The property at Newtownpark Avenue was acquired by this department in that context. “Its proposed use will be determined in the context of other anticipated projects and property acquisitions in the wider area and the specifics of its development will be subject to the views of the planning authority.”

The two-storey house known as Abilene is a listed building and was owned for 77 years by the prominent Findlater business family.

It originally served as a farmhouse on the Proby Estate after being built in 1790. Several outbuildings were added over the years and the main house was extended in the 1950s to give it an overall floor area of 335sq m (3,602sq ft).

Abilene was bought in 1941 by Dermot Findlater, who ran the successful Findlater grocery and wine business on Dublin’s O’Connell Street for decades. He and his wife, Dorothea, had six children. She continued to reside at the Blackrock home following Dermot’s death in 1962 and died in November 2017 as Ireland’s oldest citizen, just a few weeks short of 108.

Donal Kellegher of Cushman & Wakefield had been confident of an early sale of Abilene because of the sharp recovery in the housing market and the acute shortage of homes in areas such as Blackrock, Foxrock and Mount Merrion.

To attract the attention of one the housebuilding companies, the Findlaters commissioned architects O’Mahony Pike to prepare a detailed feasibility study on the potential for redeveloping much of the site.

The advisory group suggested several development options. These range from 43 to 67 houses and apartments under the Dún Laoghaire-Rathdown County Development Plan.