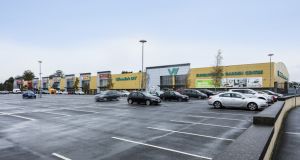 The Carlow deal was brokered by Robert Murphy of Murphy Mulhall on behalf of the vendor while Michele Jackson of TWM acted for Friends First.

Friends First has emerged as the new owner of Carlow Retail Park, having bought the 100,000sq ft facility for €16.75 million in an off-market deal. The investment will show an initial yield of 7.8 per cent.

The transaction will strengthen the company’s standing in the retail park market, where it already controls Kilkenny Retail Park and The Globe in Naas. It also purchased Citypoint in Galway a few weeks ago.

Carlow Retail Park first opened in 2003 and produces a rental income of €1.412 million.

The retail park is located at Hanover Road, about 500m southeast of the town centre.

In addition to being a growing dormitory town for Dublin, Carlow is home to a number of employers including MSD, FBD, Netwatch and Numum.

It is also home to two leading higher-level educational institutions that cater to more than 8,000 students.

Claire Solon, head of property at Friends First, said the company had experienced continued rental growth in the retail park market. Although the fund is predominantly Dublin-based, she added, there have been regional opportunities and the retail park fitted well with Friends First’s existing portfolio.

The Carlow deal was brokered by Robert Murphy of Murphy Mulhall on behalf of the vendor while Michele Jackson of TWM acted for Friends First.