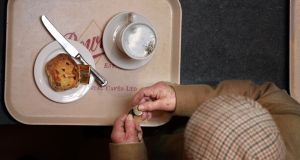 Paying for a coffee and a scone on the last day of business at Bewleys Cafe in Grafton Street, Dublin. Photograph: Dara Mac Dónaill

A dispute between Bewley’s Cafe on Dublin’s Grafton Street and its landlord over alleged rent arrears is to go to mediation.

Mr Justice David Barniville said in the High Court on Monday that he “very much welcomed” that the parties had engaged constructively and had agreed to go to mediation and he wished them every success with that.

RGRE Grafton Ltd, a company controlled by developer Johnny Ronan, initiated proceedings earlier this month against Bewley’s Cafe Grafton Street Ltd for summary judgment of €747,000 over alleged rent arrears and for possession of the premises.

Ross Awlyard, instructed by Barbara Galvin of Eversheds, for the landlord, previously told the court that RGRE is the successor in title of the premises, leased to the defendant since 1987.

He said the annual rent due was approximately €1.4 million, to be paid on a quarterly basis. Following the outbreak of the Covid-19 pandemic, the defendant asked for a rent holiday of six months. RGRE declined that application for reasons including that it believed the defendant had the means to discharge its rent obligations, counsel said.

The tenant’s parent company, Bewley’s Ltd, which RGRE says is owned by the family of businessman Patrick Campbell, was sitting on cash reserves of over €6 million and net assets of €5 million, counsel said.

RGRE was subsequently made aware of the tenant’s intention to permanently close the cafe, and make all staff redundant, through statements in The Irish Times newspaper, he said.

The cafe did not reopen after certain restrictions on businesses were lifted in late June and the defendant had not engaged since late April in any meaningful way with RGRE or broker an agreement to try and save the cafe business, counsel said.

As a result, rent, plus interest, totalling some €747,000, is due and owing to RGBE and the landlord does not have possession of the property, he said.

On Monday, when RGRE’s application to have the case admitted to the Commercial Court came before Mr Justice Bairnville, he was told that, while there was no objection to the case being fast-tracked, the sides had agreed to go to mediation on July 20th.

In the circumstances, the judge agreed to admit the case to the Commercial Court list but adjourned making any further directions to facilitate the mediation. Noting it may be unnecessary to proceed if the mediation is successful, he wished the parties well in that regard.