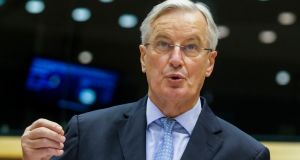 Businesses, north and south, must deal with the consequences of Brexit and accept that it cannot be “business as usual” for trade with Britain, the EU’s chief negotiator Michel Barnier has said.

The man who helped broker the Brexit withdrawal treaty and post-Brexit EU-UK trade deal ruled out any reliefs or derogations from EU rules to ease border controls that are causing food and supply shortages and disruptions on trade to Ireland from Britain.

The two treaties must be implemented “carefully, precisely, objectively,” he said.

“Let me be frank and repeat what I said more or less every day during the last four-and-a-half years: Brexit means Brexit,” he said.

Mr Barnier said Brexit “cannot be business as usual” and the “challenges” from new rules on EU-UK trade were “linked mechanically, automatically to Brexit” and the UK’s exit from the EU customs union and single market has led to “many, many changes.”

“We will continue to follow these difficulties to try to help,” he said, adding that the EU would continue to maintain a “spirit of solidarity” with Ireland and Northern Ireland.

The French negotiator was speaking on an online event after receiving the “European of the Year” award from the Dublin-based pro-EU group, European Movement Ireland.

“Rules of origin” regulations that have severely disrupted supply chains for goods flowing between Ireland and mainland Europe through Britain must also be respected, he said, in order to protect consumers, businesses and jobs.

“[They are] the rules and it is a consequence of Brexit,” he said.

Mr Barnier said the UK must be “very careful” in the long-running dispute over its refusal to grant full diplomatic status to the EU mission to the UK,

He hoped that the two sides would be able “to find a clever and objective solution.”

“It would be wise, in my view, for the UK to find a clever solution,” he said.

Mr Barnier warned that the EU would not hesitate to act against Britain if it diverged in a way that broke commitments in its trade agreement, under the provisions contained in the post-Brexit trade deal that allow for cross-sector retaliation.

It comes after signals from the British government that it was preparing to diverge from its current alignment with the EU in several areas.

Since the deal, Boris Johnson’s government has briefed the media about plans to cut taxes and regulations to make the “Singapore of Europe”, reduce worker protections and rescind a ban on pesticides blamed for declining bee populations to allow emergency use.

“We are not surprised because we are not naive,” Mr Barnier said.

“In the last few days I listened carefully what were the speeches from ministers and stakeholders in the UK on workers conditions... the pesticides, and also for the financial services.

“The point is for us to know and look carefully if there is a risk or not that this new autonomy of the UK vis-a-vis the EU rules – and the Brexit is about regaining this autonomy – becomes or not in the future a tool for dumping against us.”

“We will see carefully, and we are not ready to accept any kind of dumping against us. In that case we will use the tools included in the treaty.”

The EU sought strong guarantees in the treaty that Britain could not slash regulations and allow its businesses to undercut the bloc, an issue known as the level playing field.

The treaty allows for either side to complain if they feel the other is breaking level playing field commitments, and disputes can lead to legally-binding arbitration and ultimately the imposition of tariffs on trade in retaliation.

Asked if he feared other countries might follow the UK out of the EU, Mr Barnier said he believed no other state be tempted to leave “but we have to be vigilant.”

“We have to draw the lessons of Brexit and to understand why 52 per cent of the British people voted against Europe,” he said.

“There are reasons and we have to listen, to understand and to answer.”

Mr Barnier said that tweets posted by the new US president Joe Biden last year in support of Brexit withdrawal treaty were “important” during the trade talks with the UK.

Recalling his past visits to Ireland during Brexit negotiations, Mr Barnier said he was moved during discussions with people in Northern Ireland about their concerns about the return of a hard border and the memories that they shared of the Troubles.