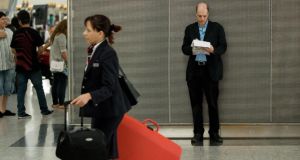 Internet research has convinced some we can know everything. But away from Google’s spoon dipped into Wikipedia’s stockpot, the idea of the mystery of what may go on inside Willy Wonka’s chocolate factory at the edge of town thrills and delights us. Secrecy has a romance – it defines the CIA, the Freemasons, the government military research establishment, that shuttered warehouse on an industrial estate.

In shining a light into their corners, does Alain de Botton’s Writers in Residence book series seek to clarify the nature of institutions or make them appear even more strange?

“Hopefully a little of both,” he says. “In the 19th century, people wrote travel books about Africa, because it was so hard to get to. Businesses and organisations are the new Africa. They are dangerous, forbidden and very, very interesting.”

Writers in Residence is de Botton’s brainchild. A tool of inquiry in the form of publishing, the project breaks down the walls of opaque institutions.

Three books have been produced this year: towards the back of each, the parameters of the quest are clearly stated: “There are many places in the modern world that we do not understand because we cannot get inside them.”

The Swiss-British writer is well-known for his efforts to democratise what many regard as “egghead” territory.

Proust, philosophy and religion have all provided material for the 14 books bearing his name. While he has won acclaim and popularity for bringing “challenging” ideas to a wider public, he has also been accused of damaging some ideas by dumbing them down.

Where did the idea for this speedy, 21st-century sociology come from?

“I’ve always been really alive to the beauty and interest of modern industry and technology. Also, of course, its horror and drudgery. I wanted to give literary expression to this,” he says.

“Heathrow airport invited me to be their writer in residence [in 2009] and I so loved my time there, writing about everything from the control tower to airline catering facilities, that it fired me up with the idea of starting an organisation devoted to putting writers in the odd places of the modern world.”

That same year he published a book The Pleasures and Sorrows of Work, in which he considers 10 different jobs, from biscuit-maker to rocket scientist.

“Modern literature is written by people who generally don’t leave the house enough. That’s to do with the specialisation of all jobs: it’s extremely hard to do anything now without being a professional. Including writing. This narrows experience and the art we make. I wanted to help correct it.”

De Botton traces the precedents and inspirations for workplace literature back to Norman Mailer’s Of a Fire on the Moon, a contemporaneous book about Nasa’s 1969 space mission. He describes it as “the single greatest influence”. Also, Virginia Woolf’s 1931 essay The Docks of London showed him “that you can write about the big ‘boring’ bits of life and make them thrilling”.

With Geoff Dyer playing the engaging smart Alec stowaway on a US navy floating factory of war and Douglas Coupland musing about minds being rewired by Alcatel-Lucent, it is clear the key investigative tool of the book series is literary insight. Does de Botton think literary insight is generally undervalued in modern inquiry?

“Totally. Writers’ minds are devoted to the private, journalists to the public. That’s a pity, because journalists often aren’t good at the psychology or the local colour. They will record the facts but leave the ‘life’ out of the picture. We desperately need to see, smell, taste the world, not just read about it factually.”

What if I describe his project as the thinking person’s version of industrial espionage? “Yes. Geoff’s work on the USS George Bush is like a teenage boy’s book rewritten by Walt Whitman and Emerson.”

How did he draw up lists of writers and establishments to release them into?

“We went for the biggest names we could find, and then worked our way down. We got so many nos it’s the hardest job I ever took on. We were turned down by Airforce One, Buckingham Palace, Number 10. But we got plenty of yeses too.

“Also, we got turned down by tons of writers – Paul Auster, Don DeLillo, Martin Amis. Writers are a crabby, individualistic, unco-operative lot. They say, ‘I’m busy now, but try me in five years when my novel is finished.’ Fair enough, bless them…”

Their images are blended throughout the pages, a visual anchor to corroborate the words but also to work as a vital second set of eyes.

“I love documentary photography and this felt to me like it needed to be illustrated by great people,” says de Botton. “So we visited Magnum [the international co-operative founded by Henri Cartier-Bresson], who gave us free access to all their team. We couldn’t have done it without them.”

What next? “I still haven’t given up on getting into Airforce One.” Untangling the wires: Douglas Coupland unravels a little-known leviathan whose cables are the internet Multicoloured clown shoelaces spew out of shelving units. The oranges, reds, blues and greens are a rendered rainbow: someone has taken a knife to the spectrum and sliced it lengthways.

Scientists dart in and out of offices. Scruffy carpets and sickly brown furniture set a dowdy scene.

These images were taken by Olivia Arthur. Words present smart cookies who are badly dressed. They have crazy conversations and mathematimise the banal – how to most efficiently eat a hotdog and the like. Where the hell are we?

Alcatel-Lucent. The firm behind the internet. This is one of its New Jersey sites. The ethereal data haze in which we all live has real-world feet of clay. Forget wifi, all internet data is ultimately routed through cables. Alcatel-Lucent cables.

Douglas Coupland, writer of Generation X (1991) and coiner of the phrase “McJob”, was asked by Alain de Botton to investigate Alcatel-Lucent. The result is Kitten Clone. “What made it interesting was the technology and the under-the-radarness. There had to have been something there for it to be so big but so invisible,” says Coupland. “I was expecting something gee-whizz futuristic, and it was like going back to your old high-school chemistry lab after two decades of budget cuts. The grimness was shocking.”

In outposts in New Jersey, France and China, he bounces ideas off workers, often animating scenes in the life of founding father Alphonse Garreau. People reveal technological fears and hopes: there is the striking idea that soon technology will learn us.

What did Coupland learn? “I acquired an understanding of why people in 2014 are different from, say, people in 1994.”

Anything perturb him? “How tenuous our link to the 21st century really is: tiny, tiny little threads that go from continent to continent, so easily wrecked by almost anything. New Zealand, in particular, is one anchor dredge away from being sent back to 1989. I was there when they voted down a second cable. It’s the stupidest decision their government could have made, and it will soon bite them in the ass.”

His indignant tone is recognisable from the book in which he quotes a Dutch chief executive: “Never have two countries with McDonald’s restaurants been at war with each other.”

Coupland uses the past, present and future as section titles. With archives, real-time updates and the expectations of tomorrow all part of the landscape, is internet “time” becoming the same as “speed”? “That’s a nice way of putting it,” he says. “But in narrative, even with modern brains, we still need a structure, and past/present/future is always handy.”

His book ends with a grotesque fable of fractured family life. A father communicates with a cloned offspring. Where does Coupland see family communication going?

“The odd thing about the internet is that for such an intensely solitary activity, it has an extraordinary knack for reinforcing all tribal allegiances.”

Writers in Residence: Illuminating dark corners Spring edition Another Great Day at Sea: Geoff Dyer does battle with the US navy on board the USS George HW Bush. Emerging as human cargo from below deck, he gets behind the minds and hearts of all the military ranks to wind up sitting at the captain’s table.

Summer edition Money and Tough Love: Liaquat Ahamed follows the International Monetary Fund from Washington to Dublin to Japan to Maputo, painting a world economic agency all too aware of its own flaws.

Winter edition Kitten Clone: Douglas Coupland visits Alcatel-Lucent sites in the US, France and China. He explores a vast infrastructural plank of the cabled internet.

Spring 2015 edition Inside the United Nations: Alexander Hemon. l The series is published by Visual Editions