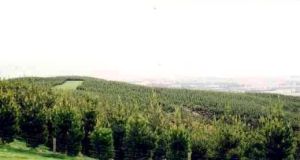 A forestry plantation. Arden Forestry Management is to be wound up

A forestry investment firm ,which is under Garda investigation amid concerns it may have been a pyramid scheme, is to be wound up, the High Court has heard.

Arden Forestry Management, an Irish registered company, had raised €4 million from 132 UK investors and the funds were to be used to buy forestry in Ireland. Only €200,000 of that money was spent on forestry, the court was previously told.

Mr Conroy said he wanted to vary the earlier order so that shares held by two Arden directors in that Dubai firm should also be transferred to the liquidated company. When that happened, these particular proceedings might no longer trouble the court, he said.

Lawyers for the directors consented to the application before the court.

Mr Justice O’Connor said the orders granted earlier should continue and could be varied to allow for transfer of the shares. He has adjourned the matter for two weeks.