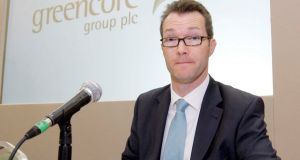 Chief executive Patrick Coveney: “The first half of FY18 has been challenging for Greencore and its shareholders.” Photograph: Mark Stedman/Photocall Ireland

Shares in convenience food giant Greencore jumped nearly 10 per cent on Tuesday even though the company reported an operating loss of £4.4 million for the six months to the end of March.

This compared to an operating profit of £24.5 million for the same period last year and reflected the firm’s ongoing problems in the United States, where it has been struggling to utilise capacity at several legacy plants.

Nonetheless, investors were buoyed by stronger-than-expected revenue, which rose by 22.6 per cent to £1.24 billion, and a more upbeat outlook for the remainder of the year, which typically accounts for a greater percentage of sales.

“The first half of FY18 has been challenging for Greencore and its shareholders,” said chief executive Patrick Coveney.

“While we delivered strong revenue growth in both the UK and US, profit growth was impacted by the challenges experienced in the original part of Greencore’s US division,” he said.

Mr Coveney is directly overseeing a restructuring of the group’s US business, centred around its flagship subsidiary Peacock Foods, which it bought in 2016 for €633 million and which now accounts for 82 per cent of its US sales.

As part of the reconfiguration, production has ceased at its loss-making Rhode Island plant and the company now plans to sell the site. Other sites in Minneapolis and Jacksonville are to be incorporated into the Peacock network, which is anchored to several big outsourcing contracts from other US food groups, including Tyson Foods, Kraft-Heinz and Dole.

While it was too early to say the US business had turned a corner, Mr Coveney said he was confident the company had hit upon the right strategy of focusing almost exclusively on contracts with branded food partners.

He said the most satisfying aspect of the results was being able to demonstrate to investors the growth and potential of the Peacock business.

Revenues in Greencore’s convenience foods US division jumped by 55 per cent to £504 million reflecting the purchase of Peacock Foods in 2016, while adjusted operating profits rose 48.2 per cent to £12.6 million.

“The growth and performance of the Peacock Foods business since its acquisition in December 2016 has reinforced the group’s belief in the opportunity for value added, assembly-led convenience foods manufacturing in the US,” the company said.

The company re-iterated its forecast of underlying earnings per share of between 14.7 pence to 15.7 pence for the full year.

It also said that revenues in its convenience foods UK and Ireland division rose by 7.2 per cent to £735 million while operating profits were up 0.6 per cent to £47 million as volume growth in its food to go business was offset by the residual impact of commercial investments and the adverse weather.