Glanbia, Lakeland and United Dairy Farmers could bid for Lacpatrick 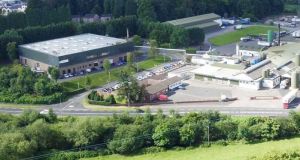 A Co Monaghan facility of Lacpatrick. The co-op invested €40m last year in a new drier used for powdered milk

Food groups Glanbia, Lakeland and United Dairy Farmers could bid for milk processor Lacpatrick, which wants to merge or join forces with another player.

Lacpatrick chairman Andrew McConkey said on Wednesday that an emergency meeting of its board decided to pursue options that could include “partnerships, joint ventures, mergers” or other opportunities.

Observers believe that Killeshandra, Co Cavan-based Lakeland could be an “obvious” bidder for Lacpatrick as their supplier bases overlap in places.

Similarly, both Co Kilkenny-based Glanbia and Belfast-headquartered United buy milk from farmers in regions bordering on those from where Lacpatrick draws its supplies.

Lakeland noted Mr McConkey’s statement, and added that Lacpatrick had a “very substantial business with a strong heritage in dairy farming”. Neither Glanbia nor United commented.

Mr McConkey said the board meeting on Tuesday, April 17th, agreed to identify the best way forward for suppliers, shareholders, staff and customers. He stressed that business was continuing as normal. “The decision by the board of Lacpatrick comes following a number of approaches from international and national companies from the sector in recent months.”

Lacpatrick’s move did not surprise the industry. The co-op processes milk bought from farmers based in an area encompassing counties Derry, Fermanagh, Monaghan and Tyrone.

The processor recently cut milk prices for March by 2 pence sterling a litre to 25p for Northern Ireland suppliers and 2.5 cent to 30.25 cent a litre for those in the Republic.

Mr McConkey blamed the cuts on an exceptionally weak market, especially for milk powder. He told suppliers that since October prices paid to farmers were “well ahead” of market returns.

In the co-op’s April newsletter he points out that European countries such as Germany, the Netherlands, France and Britain have been “pumping out milk since last summer”, oversupplying the market and cutting prices.

Its balance sheet for the end of 2016 shows that it had net assets of almost €75 million, including cash and stocks of €15 million. Lacpatrick’s operations earned a profit of €2.9 million that year.

The co-op’s board and management believe that merging with another operator would boost scale, and position it better to combat falling prices.

Co-ops Town of Monaghan and Co Derry-based Ballyrashane merged to form Lacpatrick in 2015. It has operations in Derry, Dublin, Fermanagh, Monaghan and Tyrone.

1 Explainer: what is the row about SF’s multinational tax plan?
2 Getting out from under ‘never-ending’ Celtic Tiger debt burden
3 Pensions: Estonia plans to unleash a potential €4.85bn on economy
4 Fair Deal nursing homecare leaves little for bills and gifts
5 Personal insolvency practitioner to pay €6,000 after providing misleading details
6 Britain after Brexit will not be alone, but it will be lonelier
7 More affordable iPhone 11 is unlikely star of Apple earnings
8 Brittany Ferries announces new services to Spain and France from Rosslare
9 Are there annual limits on inheritances or gifts to a child?
10 Building lobby criticises election promises on housing
Real news has value SUBSCRIBE