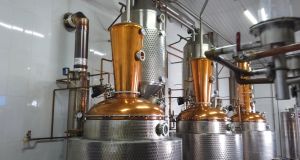 A co-founder of Listoke Distillery in Co Louth is seeking a High Court order preventing her dismissal as managing director of the company.

Those proceedings were resolved but she has brought a fresh application for an injunction preventing her dismissal after the company decided to terminate her position on notice.

She is seeking various orders, pending the full hearing of her action, including preventing the company appointing anyone else to act as its managing director and restraining her dismissal.

The defendants, represented by Marcus Dowling BL, are opposing her application.

In her earlier proceedings, Ms Conlon, represented by Padraic Lyons BL, challenged her purported suspension from her role.

She had sought an injunction lifting her suspension from duty on May 22nd last and a declaration that her suspension, pending an investigation into the provenance of a shareholders’ agreement entered into in 2018, was invalid and not necessary.

When the matter returned to the High Court on Wednesday Ms Justice Leonie Reynolds was told, on consent, the proceedings challenging suspension could be struck out with an order for Ms Conlon’s legal costs to be paid by the defendant.

Mr Lyons said his client was now seeking a date for the hearing of her second motion, where she seeks an injunction preventing her employment being terminated.

Under an agreement between the parties, Ms Conlon remains in her role as the firm’s MD.

The case had previously been adjourned by the judge to allow a mediation to take place but that failed to resolve the dispute.

Since the outbreak of the Covid-19 pandemic, the business has stopped its regular activities and has been manufacturing hand sanitiser.

1 Ufurnish: ‘It’s like Skyscanner, but for furniture’
2 Mayo’s Chris Barrett: Balancing work and play for GAA ‘not sustainable’ any more
3 Coronavirus spreads to sandwich king
4 Taxi app Free Now blames ‘technical issues’ for driver payment delays
5 Virgin Media vows to withhold sports channels until Eir ‘pays its bill’
6 Avoca warns of redundancies due to coronavirus
7 Moving in and out of lockdown is a recipe for economic disaster
8 Lenders to baggage-handler Swissport offer rescue deal
9 John FitzGerald: Exchange rate control no panacea for economic crisis
10 The Irish Times Company of the Year: the three finalists
Real news has value SUBSCRIBE