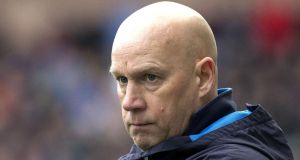 Rangers caretaker boss Kenny McDowell has revealed he is duty bound to play the five Newcastle United loanees who came to Ibrox on the final day of the transfer window. (Photograph: PA Wire)

Rangers caretaker boss Kenny McDowall sensationally revealed on Thursday that he has been told he must play the five Newcastle loan players added to his squad on transfer deadline day.

Newcastle owner Mike Ashley is a shareholder at Rangers with an 8.92 per cent stake, and he and Rangers face hearings before the Scottish Football Association in March over the Sports Direct owner’s possible breaches of dual interest rules.

Speaking at the Murray Park training centre, McDowall, who has signalled his intent to leave at the end of the season, said: “On Monday night I got a call from Derek (Llambias, Rangers chief executive) saying he had secured five players on loan.

“Three of them arrived and two of them will be coming the next three or four weeks — they are injured.

“When I was given the job I was told players incoming and outgoing wouldn’t be my responsibility.

Asked if he was duty-bound to play them, he replied: “Yes.”

Then asked if he had to play every one of them every week, he again, replied: “Yes. They are obviously good players — they play for Newcastle — but I will carry on and do what I am told to do.”

McDowall, who revealed the instruction to guarantee the loan players a game was given to him by Llambias and Rangers football board chairman Sandy Easdale, was asked how the dressing room might be affected.

He said: “That’s the nature of being at a big club. There are always new players arriving at big clubs and it is something the players will have to deal with.

“It is competition and it is up to them and work hard at training and look after their own standards.

“I would like to think the players would be professional and do their jobs. We will take it from there.

“I have been told what to do and I have told them I am more than happy to carry out what they have told me, so I don’t have a problem with it at all.

“(The players are not aware at this moment) but they will know now, obviously.”

Asked how he could be comfortable with the situation, McDowall added: “I have handed in my notice and have told the guys I am happy to take the team.

“So I am not going to complain. I will carry out the instructions that they give me and do my best. I have a job to do and I am happy to do it.

“The boys have come up to play and they will play. That’s just how it is. They are in the squad for Sunday (Scottish Cup tie against Raith Rovers).

“I would like the fans to give them their support, they are playing with Rangers after all.

“The lads are just here to play football. They are nice lads and look good players. It is not their doing. They are a welcome addition to our squad.”