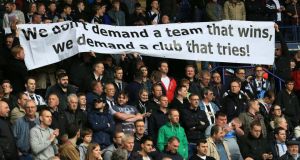 In the corner shops of Tyneside, Thursday’s Newcastle Evening Chronicle brought a story from the vaults. It concerned May 7th, 1955, and Jackie Milburn. Sixty years ago to the day, Milburn rose at the near post at Wembley to give Newcastle United a first-minute lead against Manchester City in the FA Cup final. Newcastle went on to win 3-1.

It was Newcastle’s third FA Cup triumph in five years, at a time when there was no European football and no League Cup. In three of those five seasons Newcastle finished in the top eight in the league.

Newcastle United were a force in the land and anyone suggesting then that 1955 would be the year of the club’s last major domestic trophy would have been laughed down the River Tyne and out into the North Sea.

But that is the reality. Sixty years.

Back in ’55, Milburn leapt to meet Len White’s corner. As John Gibson recalled in the Chronicle: “Jackie always reckoned he could head a ball despite all who said not. The trouble was, he suffered from fibrositis which made him terrified to jump with anyone in case his neck ‘stuck’. If it did, he was unable to do anything except lie in bed. His wife Laura even had to clean his teeth.”

Sixty years on, there was another first-minute corner. This one was last Saturday for Leicester City and Leonardo Ulloa met it, like Milburn, at the near post. After 38 seconds Newcastle were 1-0 down and on the way to a 3-0 defeat and an eighth consecutive loss in the Premier League, a sequence that is as embarrassing as it is damaging.

On the same day, West Bromwich Albion were winning 1-0 at Manchester United. West Brom were drilled, defensive and dangerous on the break. They were also threatening at corners, which is why it is foreseeable that when they go to St James’ Park today, West Brom will win a corner on their right, Chris Brunt will spear it in with his left and either Gareth McAuley or Jonas Olsson will meet it with force and Tony Pulis’s team will score.

Should that happen, Newcastle will need to score twice to win – and Newcastle have managed two goals in only two games since New Year’s Day. In those 16 games, Newcastle have conceded 30 and scored 11.

Some think Pardew’s departure caused Newcastle’s collapse, a view that rather ignores the second half of last season when Newcastle lost 14 of their last 20 league games and went out of the FA Cup in the third round at home to soon-to-be-relegated Cardiff City. In 13 of those 20 league games, Newcastle didn’t score. Pardew was the manager.

Despite that appalling run, Newcastle finished 10th, which says something about the standard of the Premier League.

During that run, Yohan Cabaye was sold. After it, Loïc Rémy returned to QPR from whom he had been on loan. The man who owns Newcastle United, Mike Ashley – he likes a loan.

Losing half a winning team helps no club. But then the Newcastle United of Mike Ashley has been trapped in cycle of loss.

Rob Lee, whose brilliant commitment once propelled Newcastle past Barcelona in the Champions League, has been lost. Lee was coaching boys in South Shields recently, on the morning of a Newcastle match.

Rather than go to St James’ afterwards, he drove home, no longer feeling welcome at a club he captained with distinction.

So many others have joined that walk-away. When Newcastle fans urged a boycott of last month’s Tottenham game – lost 3-1 – the pubs around the ground were heaving during the match. Normally they are 90-minute deserts.

Some of those supporters will be lost permanently, their actions fuelled by the loss of the club’s soul. This saw St James’ lose its name, temporarily, while the club’s attitude to the cup won by Milburn & Co has become ‘lose it’ rather than ‘take it’.

Because the Newcastle United of 2015 has settled for getting by, for lucrative mediocrity. It could work as a Premier League motto, some say.

And they were doing ‘getting by’ rather well (in a league table sense) until other losses in the last few weeks kicked in.

These include Mike Williamson and Daryl Janmaat at Leicester, Moussa Sissoko at Liverpool and Fabricio Coloccini at Everton – all to red cards. Before that, Papiss Cissé was banned for seven matches for spitting in the face of Jonny Evans. Whatever happened to the heroes?

The plot – in which Newcastle are meant to appear as a credible sporting institution – has also been lost. This week alone caretaker manager John Carver has lambasted Williamson publicly and praised himself sincerely, captain Coloccini has written an open letter to fans requesting understanding and Steve McClaren has said he is staying at Derby County.

There is no mention of Tony Pulis, a week after he spoke of the “uncertain future” at West Brom, a club up for sale. Pulis might just enjoy reminding people of his powers of rejuvenation at a place in need of it.

Some argue that relegation would be no bad thing as it might then lead to the loss of Ashley.

But there is no guarantee of that, whereas relegation does ensure a trip to MK Dons next season.

As Fulham, Norwich, Cardiff, Wigan and Reading have discovered in the past two seasons alone, bouncing back is not straightforward. So things can get worse. Newcastle United feel stuck. Stuck like Jackie Milburn’s neck.

1 Six Nations: Ireland are contenders but England still the team to beat
2 In Donegal Michael Murphy is seen, simply, as a godsend
3 Owen Doyle: Creeping professionalism of schools rugby a threat to the game
4 Gary Neville in Qatar an exercise in semi-journalism
5 Weekend hurling previews: Tipperary aiming to make an opening statement
Real news has value SUBSCRIBE
Crossword Get access to over 6,000 interactive crosswords