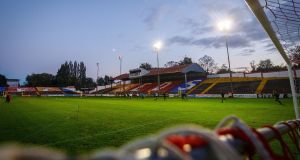 “A lot of the changes are small but they have certainly gone down well with the players and we hope they will be well received by the wider public.”

A week into the new Women’s National League season, Shelbourne have announced changes their chief executive, David O’Connor, says hopes will demonstrate the club’s ongoing commitment to “parity of esteem” around Tolka Park.

Perhaps the most significant is a decision to stage the women’s senior team’s games at the club’s home ground of Tolka Park rather than at the AUL, where they took place last season. And, like Derry City a couple of weeks ago, Shelbourne have also dropped the reference to “Ladies” in the team’s title, ensured that its current kit deal covers men and women equally and committed to greater inclusion in its social media coverage.

“A lot of the changes are small,” says O’Connor, himself a former league of Ireland player with Shamrock Rovers, UCD and Limerick, “but they have certainly gone down well with the players and we hope they will be well received by the wider public.

“The most obvious one is the decision to stage the senior team’s home games at Tolka, starting this Saturday with the game against Limerick at 4pm. I know as a former player myself just what a difference it makes to be playing in a stadium and we have a great group of volunteers around the club who have enabled us to make this possible.

“We have had a situation since the merger (with Raheny United in 2015) where people were talking about bringing the two parts of the club together because while we were, on the face of it, one club with everyone wearing the same crest and all of that, it did still feel as though there was a degree of separation there and I suppose this is partly an attempt to address that.”

The women’s side of the club has, in fact, been highly successful in recent years. In 2016 it won the treble and a number of up-and-coming Irish internationals like Jessica Ziu, Emily Whelan and Isibeal Atkinson are all based there.

Its Under-17 side won the inaugural National League at that level last season and seven of the club’s players have been included in the Irish squad for the Under-17 European Championship Elite Phase qualifiers in Scotland at the end of this month. Quite a few of those players featured for the first team last weekend as Shelbourne kicked off their 2019 campaign with a 10-1 win at Kilkenny United.

“It’s a very important part of the club. Financially, there are challenges involved in running it. The men’s team is, in part at least, funded by gate receipts and it is obviously easier to get decentish crowds through the turnstiles to watch the men play but we hope that these changes, particularly moving the games, will help on that front.

“Overall, the team costs somewhere between €30,000 and €50,000, which is significant but it is no reason to shy away from having a team or trying to treat it with the same respect that the men’s one gets. We are actively looking for sponsors to help with the costs involved. This is such a small thing but hopefully it is seen by the football community, and everyone else, as a bit of a statement.”