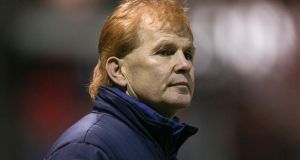 Liam Buckley: will not want St Patrick’s to be in a scrap to avoid relegation. Photograph: Gary Carr/Inpho

It is early to talk about the top and bottom of the League of Ireland table, of course, but it is interesting to see the two title favourites occupying first and second spots while all the clubs most widely tipped to go down are among the five still to get a point.

With four of those playing each other this Friday, there will be early pressure on some of the managers concerned to get the show on the road in the Premier Division.

St Patrick’s won’t want to be associated with the scrap to avoid relegation and Liam Buckley will certainly be anxious to get something out of a trip to Sligo. They have conceded nine goals in their opening two games, leaving Dave Robertson in need of some ship-steadying.

The hosts have Jonah Ayunga out suspended, while the Dubliners will be without both Darren Dennehy and Aidan Keena for the same reason. Conan Byrne is one goal away from 100 in the league and this, his manager might point out, would be a perfect night to reach the landmark.

Away wins have been thin on the ground in recent meetings between Finn Harps and Galway United, but Shane Keegan insists his side are in positive form as they head to Ballybofey. The visitors are without Paul Sinnott due to an ankle injury, while Ollie Horgan has doubts about Ciaran Gallagher, Damien McNulty and Danny Morrissey.

Dylan Hayes goes straight into the Bohemians squad for the visit of Bray after resigning. However, Hugh Douglas is a doubt for Harry Kenny whose side are one of four with full points.

Drogheda are another but they will be missing Killian Brennan for the visit of Cork while Jake Hyland faces a late test. Sean Maguire is rated “fifty-fifty” for City due to a hamstring problem, but Garry Buckley returns from suspension and John Dunleavy could come back into consideration.

Gary Rogers, Stephen O’Donnell and Dane Massey all do for the champions as they welcome Limerick, but Derry City’s defensive concerns are made worse by an injury to Conor McDermott that may force a tactical switch for the visit to Tallaght. Rory Patterson is also still out.

City took seven of nine points from Rovers last year but Stephen Bradley, who has Graham Burke suspended, says the northerners will find a different team awaits this time. “We’re ready for them,” he says.