Familiarity comes in spades as Shels and Bohs lock horns 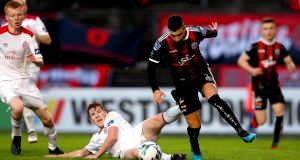 “Obviously we’re familiar with their manager, assistant manager and their strength and conditioning coach,” says Bohemians boss Keith Long, with just a hint of understatement, when asked about preparations for Friday night’s Dublin derby against next-door neighbours Shelbourne.

Long was speaking at an event held to launch EirSports’ 2020 schedule of 15 Airtricity League games, which kicks off with the game from Dalymount. Shelbourne manager Ian Morris also spoke at the event, listing the players who spent time at Bohemians only to end up at Tolka Park.

It’s been quite a while since these two met in the league, but they are no strangers to each other, that’s for sure.

“I think they’ll be a great addition to the league,” says Long. “They’ve been in the first division for far too long in my opinion. Games between us are big games and big games are what it’s all about.

“So we’re looking forward to the challenge of tomorrow night, although we’ve got to concentrate on the game and making sure our performance improves on what we saw in Derry last week.”

The two clubs are level on six points apiece going into the game, although Shelbourne’s second-half performance against Dundalk, and the defeat of St Patrick’s they have managed since, might well have them in better spirits than their opponents, who are looking to put that 2-0 loss in Derry, which Long believes was harsh on his players, behind them.

The hosts are again without goalkeeper James Talbot (ankle) and, while Dinny Corcoran is getting back towards full fitness again, he is a week or more away from a first team return. Morris, meanwhile, still has Daniel Byrne on the injured list while Jaze Kabia will have a late test on the ankle injury he picked up in last week’s win.

Dundalk can go back joint top of the table with Shamrock Rovers, for a day at least, if they can beat Finn Harps away, but Sean Murray and Pat McEleney are still sidelined, while Darragh Leahy seems only to have an outside chance of featuring as he works his way back from an ankle problem.

Tony McNamee joins Mark Timlin on the home side’s injury list, while Mark Coyle is reckoned to be a doubt for the hosts, who had made a strong start to the new season prior to losing last week in Cork.

City are at Richmond Park this evening, where both sides will be looking to put slow starts behind them. Neale Fenn will still be missing Deshane Dalling, who is suspended, while Liam Bossin and Conor Davis are both injured.

St Pat’s boss Stephen O’Donnell is missing both Robbie Benson, who is injured, and Rory Feely (suspended), although he does have Ollie Younger available again.

Derry City are without Ciaran Coll (knee) and Ally Gilchrist (concussion) for the trip to Waterford, while Declan Devine will have to make a final call today on whether to bring in Gerardo Bruna, who has had some time off this week in order to be with his wife who had a baby. For Waterford, Andre Burley is suspended.

5 Chelsea win at Liverpool to move into top four