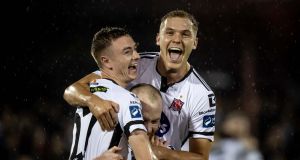 It was not, said Vinny Perth, trying desperately to make himself heard above the celebrations, the Dundalk way to win in the closing stages here at Oriel Park but there were to be no refund requests from the home crowd, that much was fairly certain.

Rovers had said they would give their all to preventing the title going to their rivals while they were about the place and, to be fair, they were as good as their word. Ultimately, though, their best was not quite good enough and goals from Seán Hoare and Robbie Benson before the break together with a stunning strike by Michael Duffy after it, were enough to deliver the Louth club’s 14th league title, their fifth in just six seasons.

“We’ve lost really big players over the years: Richie Towell, Daryl Horgan, Pat Hoban left for a while, Ronan Finn, but we keep coming back from that because the lads are brilliant people who have pushed themselves to a new level.”

One who has found levels few would have imagined he had in him when Stephen Kenny arrived here seven years ago is Chris Shields, clearly one of those the manager had in mind. He played well again here but the 28-year-old was all for sharing the credit around after another collective display attacking skill and mental steel.

“When they came out and scored after half-time any other team might have crumbled but not us,” he said. “We always know we can come back and score again. Just keep doing what we are doing, don’t settle for 2-0.

“We took our eye off the ball a small bit then but at 2-1, as I say, any other side might have panicked but that’s the magic of Michael Duffy. What a goal . . . but I thought the whole team was fantastic.”

It was at times and while Rovers will feel they were pretty decent themselves for spells, as it was with the wider season, where and when it mattered, Dundalk possessed a slight but vital edge.

Jack Byrne’s passing from around the edge of the final third posed the home side a steady stream of problems but Rovers’ finishing was once again an issue for much of the evening with Gary Rogers not even tested over the course of a first 45.

Alan Mannus didn’t make a save of note either during that time although he had to pick the ball out of the net twice, with Hoare and then Benson capitalising on terrific crosses and terrible defending to head home from close range.

When Aaron Greene pulled one back 10 minutes after the break, though, it set the place on edge slightly and the eruption of joy that followed Duffy’s powerful drive to the top corner 10 minutes after that was short-lived as Graham Burke was allowed the time to tee up Aaron McEneff, who duly pushed the ball through a crowded area and into the bottom left corner.

It was not at all a bad way for a title to be decided – “it’s as if they set it up that way,” joked Shields – and Rovers came close twice in added time to postponing the party.

The hosts saw it through just as Shields said they always knew they would when Rovers were running away with things a bit and people were doubting the champions.

“Even when there was that 13-point deficit there, we weren’t worrying at this club,” he said with a beaming smile.

“We had games in hand and we had the grit and determination to go out turn it around. I think it’s been a 28-point swing altogether and that’s a credit to everyone involved in this side.

1 Seán O’Brien: Anger over my parents’ break-up never left me
2 2020 All-Ireland Senior Hurling Championship key dates
3 Hugo Keenan and Will Connors: The best of friends, the best of debuts
4 All-Ireland SHC 2020: Our writers and pundits make their predictions
5 Ireland get the job done against Italy to keep alive Six Nations hopes
Real news has value SUBSCRIBE