Napoli crash out of Europa League after Dnipro semi-final defeat 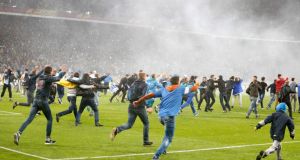 Dnipro Dnipropetrovsk’s supporters run onto the pitch to celebrate the victory over Napoli in the Europa League semi-final second leg match at the Olympic stadium in Kiev. Photo: Valentyn Ogirenko/Reuters

Dnipro advanced to their first European final after Yevhen Seleznyov’s second-half header gave them a 2-1 aggregate win over Napoli in the Europa League.

Having scored late on in the first leg, the Ukrainian side held a slender advantage heading back to Kiev courtesy of an away goal, and they improved on that with a 1-0 win that sets up a final against four-time winners Sevilla in Warsaw.

Napoli, who had perhaps been favourites to advance after dominating the first leg before conceding late on, were out of the blocks quickly once again and should have taken an early lead as the hosts sought to protect their advantage.

Gonzalo Higuain was the main culprit. He should have opened the scoring in the opening 10 minutes after he was sent through by a superb pass from Gokhan Inler, but the Argentina striker hit a tame effort at Denys Boyko, who saved well to turn it behind.

The home side were clinging on to begin with, and were forced into targeting set-pieces to make an impact while trying to disrupt the early tempo set by the visitors.

However, Higuain continued to pose a threat with his intelligent runs in behind the defence, and almost provided a perfect cross for Jose Callejon only for Leo Matos to head behind, before Higuain saw a header of his own well-saved once again by Boyko as the pair carried on their duel from the first leg.

Dnipro were lucky to escape the first period without conceding a penalty as Jaba Kankava hauled Christian Maggio to the floor, but could have edged in front as Seleznyov’s long-range effort was well tipped round the post by Mariano Andujar.

Myron Markevych’s side came out in a more positive frame of mind after the break, with Yevhen Konoplyanka growing into the game on the left wing. The Ukrainian winger gave a warning of his dribbling skills before again beating two defenders to stand up a cross to the centre of the area, where Seleznyov was able to hold off the challenge from Raul Albiol to head over a stranded Andujar.

Rafael Benitez’s side grew desperate in the closing stages, and the Spanish coach sent on captain Marek Hamsik from the bench along with Dries Mertens but they could not find their way past an increasingly assured Boyko.

Higuain again saw an effort turned away from goal with just over 10 minutes to go, but in the end it was Dnipro who looked the more likely to score. Nikola Kalinic had a shot well-saved on the break before Matheus headed against the bar in stoppage time when he should have extended the lead before the whistle was finally blown to send Dnipro through.

Holders Sevilla swept into a second consecutive Europa League final when a 2-0 success at Fiorentina on Thursday secured a crushing 5-0 aggregate rout for the La Liga club in their semi-final tie.

Sevilla had all-but booked their place in the showpiece in Warsaw after thumping the Italian side 3-0 in last week’s first leg in Spain and will seal a record fourth triumph in Europe’s second-tier club competition if they can overcome Dnipro Dnipropetrovsk on May 27th.

The Ukrainians won 1-0 at home to Fiorentina’s Serie A rivals Napoli to progress to their first European final 2-1 on aggregate.

Carlos Bacca fired Sevilla ahead in the 22nd minute at the Stadio Comunale Artemio Franchi in Florence when he sent a close-range effort arrowing into the roof of the net.

That left Fiorentina needing five goals without reply to progress but they fell further behind when Daniel Carrico made it 2-0 to the visitors five minutes later.

Fiorentina’s night went from bad to worse midway through the second half when Josip Ilicic sent a penalty kick sailing over the crossbar after Sevilla defender Grzegorz Krychowiak had felled David Pizarro in the penalty area.

If Sevilla clinch a fourth Uefa Cup/Europa league crown in their fourth final they would surpass Inter Milan, Juventus and Liverpool, who also have three.

Sevilla won back-to-back Uefa Cups in 2006 and 2007 and beat Benfica on penalties to secure the renamed trophy last term.

Another triumph would also carry a lucrative berth in the group stage of next season’s Champions League.