Niall Quinn: ‘The old FAI is alive and well’ 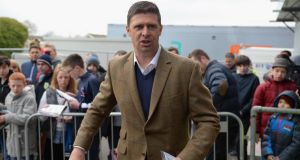 Niall Quinn has explained why he didn’t put his name forward for a place on the FAI board. Photograph: Gareth Copley/Getty Images

Niall Quinn says that he turned down the opportunity to be considered for a place on the board of the FAI after losing faith in the reform process that was supposed to be kicked-off by the report of the governance review group.

Since late last year, Quinn had spoken about getting involved in the governance of the game here with a view to changing things, both within the association and the Airtricity League, but speaking on Virgin Media he suggested that the fact that what he regards as the old guard of the FAI has retained effective control means there is little prospect of an outsider having the impact he had hoped to make.

“It’s simply because the governance review group, where it’s ended up and allowing the association to have eight of their board members from within the game and four from outside the game – those numbers don’t stack up well if you want to go in and change things,” he said.

“If I point back, to May, the start of June, we were very ambitious; felt great. There was a feeling around there that real change was going to happen. Then things went quiet.

“The AGM came along, and suddenly the review group allowed eight of the ‘old’ FAI, if you like, to get together, and that didn’t attract any great desire from anyone to go in and do anything about it.”

Quinn’s initiative, which had attracted the support of some impressive people from the worlds of both business and sport, had stalled slightly after generating a lot of positive publicity in the wake of a speech at the annual awards of the Professional Footballers’ Association of Ireland, due to a lack of clarity about what precisely he was hoping to do and how he was aiming to do it.

The former international’s own observations about the need to improve the structures and funding of the Irish game were consistently well received but the long awaited document from the group, issued at the end of March, was widely considered to be a disappointment. It received little enough attention as it was overshadowed by events the day it was released at the Mansion House, where Minister Shane Ross had gathered representatives from various sectors of the Irish game for a “stakeholder’s forum”.

His presentation to league clubs in mid July is said to have provided more clarity and certainly impressed some of those who were there. Even those who remained unconvinced, however, felt that he and those he was bringing to the table might have a positive impact in terms of addressing governance issues and pressing the case for an entirely new funding model, one that recognised the fundamental important of football to the population on sporting, social and economic levels.

They are not, however, the only people to have been dismayed by the insistence of long-time John Delaney ally Donal Conway, and fellow board member John Earley, on seeking re-election and the failure of the governance review group, which included two FAI nominees among its five members, to more effectively lay down a more concrete path to real reform.

“All in all, it didn’t suit,” concluded Quinn. “For me personally and I know for one or two people that were working with me, it wasn’t attractive. The old FAI is alive and well. Although I dare say with the revelations that were out at the weekend and where everything is going, there’ll be a lot of pressure on the old guard, still, to prove that they’re the correct people to turn the corner. We just didn’t fancy being a bit of that.”

1 Dave Hannigan: Notre Dame’s Fighting Irish leprechaun needs its ass kicked
2 Sonia O’Sullivan: Running in a bubble as the shoe wars raged
3 Stephen Kenny undaunted as a bold new era beckons for Ireland
4 Rafael Nadal: A mental giant who plays every point as though it’s his last
5 Felipe Contepomi: Lockdown a double-edged sword for the likes of Johnny Sexton
Real news has value SUBSCRIBE
Crossword Get access to over 6,000 interactive crosswords