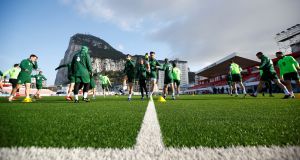 The Republic of Ireland training at the Victoria Stadium in Gibraltar. Photograph: Peter Cziborra/Reuters

Even if football journalists were to possess some godlike power to write the histories of the places they visit just to help with their intros, the Irish press pack could not have done much better with Gibraltar’s.

On multiple occasions down the centuries, outside forces have besieged the place and its people.

Not long after Britain took possession in 1713, Spain mounted a siege, the 13th apparently, in the hope of getting it back. The real gem, though, for those seeking a metaphor ahead of Saturday’s match is the Great Siege of 1779 to ’83: Poorly equipped defenders holding out pluckily for three and a half years against vastly superior forces which were thwarted in the end by a couple of moments of carelessness.

Seriously folks, we couldn’t have made this stuff up.

The reputations of the men who commanded the Spanish and French forces were badly tarnished by their failure to take the place and the damage that would be done to Mick McCarthy’s as he starts his second stint in charge of the Ireland team is almost unthinkable. Just ask Alex McLeish, whose position is the subject of some speculation following Scotland’s defeat by Kazakhstan, also, as it happens, on a plastic pitch.

“It’s a stark warning to us what can happen,” said McCarthy at his pre-match press conference.

The pitch here , as it happens, has apparently been the subject of repeated inspections this week by Uefa who obliged the hosts to keep working on it before finally passing it as fit to actually stage the game on Thursday.

At his press conference on Friday, Gibraltar’s manager Julio Ribas good-naturedly dismissed the notion that the surface would serve as something of leveller, insisting that players like Ireland’s would be well used to all sorts of pitches.

But if there is a wind swirling through the largely open stadium, as there was while Ireland trained, then this is bound to feel a bit different for the visitors.

None of which will sound much like a good excuse if Ireland fail to win.

Ribas has worked wonders since getting the job last June with November’s two victories in the Nations League the source of huge pride here.

But that competition was devised at least in small part to allow smaller countries more competitive games; this should be rather different. 13 of the Uruguayan’s 20-man squad are from a league ranked 51st in Europe while five of the six players who are based in England play non-league football.

More than half of McCarthy’s come from outside the Premier League but that should hardly be a fatal handicap on this occasion.

The bigger issue is Ireland’s ability to produce significantly improved performances and, in particular, to remain solid while posing far more of an attacking threat; something McCarthy readily acknowledged when asked at his pre-match press conference about how he has sought to address the situation.

“What have we done?” he said. “The first training session, I wasn’t happy with the amount of chances that we were creating, or players getting in the box. TC [his assistant, Terry Conroy] put a great session on exactly for that, on the third day, and we gave them the feedback on the night, just showing them the different way you can do it.

“Doing it in training is one thing; we’ve got to do it in a game, of course, But we have worked on it, and that’s pretty much all you can do; give players information in terms of wanting people to get in the box, put crosses in the box . . . however you get in there, and just try and create more chances and have more bodies there, on the move. Trying to score if we create chances, and hopefully we do. So we have worked on it.”

He gave no indication really of who will lead the attack but Sean Maguire is clearly desperate to play in a game he feels could provide the opportunity to get his international career properly up and running and McCarthy has sounded more than once over the past few weeks as though he is inclined to give him that chance.

Robbie Brady, the manager seemed to suggest, has not played enough first-team football over the past few weeks to earn himself a start which leaves Matt Doherty and James McClean as the leading candidates to play in the wide midfield roles. Conor Hourihane’s form for Aston Villa and his eye for a goalscoring opportunity from around the edge of the area might mean he rather than Harry Arter starts this one.

In truth, the finer points of the team selection should not be decisive but the game will provide the first real evidence of the approach McCarthy intends to take in this second stint in charge of the team. The challenge Gibraltar pose might be very particular in nature but the improvement he needs to generate in Ireland, is rather more general.

Coleman, who retains the captaincy, admitted as much when he said that the squad needs to consign the various disappointments of the last 18 months to history.

“The lads realise that last year wasn’t good enough,” said the Donegalman, who will win his 50th cap. “We wanted to be qualifying in the tournament. But a lot of players have come in for this and you don’t want to weigh them down with the baggage of that.

The last campaign is gone,” he continued. “It’s a fresh campaign. Winning games is what we all want to do. We’ve been at the Euros before and we want to be again.”

Both McCarthy and Coleman paid tribute to Jon Walters who announced on social media shortly before the press conference began, that he has lost his battle to get over the injury he sustained last September. After battling back on other occasions, his Achilles heel, the striker said in a Tweet, has proven to be his Achilles heel.

“As long as he’s been in the squad he’s been nothing short of an inspiration: the pride he has shown,” said Coleman. For these new lads coming in, he is an example.

“Unfortunately he got injured before the Euros in 2016 which was a pity because I thought he carried us there. Nights like the one when he scored two goals against Bosnia [in the Euro 2016 play-offs] are what he will be remembered for.”

If Gibraltar’s defences somehow hold up again in his absence, Ireland’s assault on the Rock will never be forgotten.