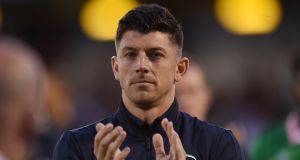 Republic of Ireland’s Keiren Westwood applauds the fans during the lap of honour after tonight’s match at Turner’s Cross. Photo: Clodagh Kilcoyne/Reuters

David Forde was the most obvious loser as Martin O’Neill named his travelling party for the European Championships after Tuesday night’s 2-1 home defeat by Belarus. The Millwall goalkeeper came on late in the game, leaving Keiren Westwood as the only member of this extended Ireland squad not to get a run out over the course of the two games. An hour later, though, it was the man who had played in Gelsenkirchen who was left out with the 35-year-old paying the price for his lack of first team action over the course of this season.

With Harry Arter effectively ruled out earlier in the day by a thigh injury and already back at home in England by kick-off time, O’Neill’s job with regard to midfield had been made just a little more straightforward and in the end Darron Gibson was the most prominent player to be cut.

The Everton player started the Belarus game but failed to make the sort of impression required to change the pecking order at that late stage and so David Meyler and Stephen Quinn will both be on the place to France.

The only other player to have featured over the campaign but still miss out was Kevin Doyle but that was rather less of a surprise given that O’Neill had opted in the end to leave him in the United States rather than even bring him back for last night’s game. The striker tweeted from the Rocky mountains that he was out on a hike with team mates but rather have been getting an outing at Turner’s Cross. Like the others, he will be watching the tournament from a distance.

Of the three, by far the most notable decision relates to Forde who O’Neill had repeatedly suggested deserved loyalty on the basis of his performances early in the campaign. Even as he broke the news to the media after having met the payers individually immediately after the match to tell them whether they had made it, he was particularly sensitive about the goalkeeper’s case.

“He kept us in the game in Germany and we got that great point which was hugely significant in our qualification,” he said. “He’s been great around the place as well and that decision was very difficult because he’s been excellent. It’s just his lack of game time recently at Millwall obviously hasn’t helped but that was disappointing.”

The mood, he said, was sombre, and Shay Given certainly looked downcast despite making the cut. “It’s not a nice feeling for anyone in there because there are players who are disappointed,” said the 40 year-old. “It’s a tough decision for the manager and it’s tough for the players. It’s a tight-knit group. So we are all gutted for the players who won’t make it.

“It’s not about celebration; it’s about what got us here and we were in this together. There are players who were left out who played in qualifying rounds. There are a few young players who probably weren’t expected to make it. It’s tough for whoever is left out because they have trained the last 10 days. It’s not easy for the gaffer either. But we’ve got to get on with it.”

For the few who played last night then missed out, it must have marked a devastating end to an already disappointing night with some of those who had started the game surely concerned as they made their way towards the dressing room afterwards as to whether they had done enough to make the cut.