Taylor managed England from 1990 to 1993, as well as Aston Villa and Watford 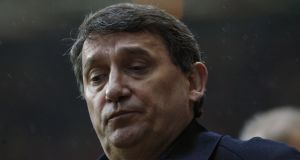 Graham Taylor – in a photograph taken in 2002, when he was manager of Aston Villa. Photograph: Shaun Botterill/Getty Images

Taylor, whose playing career took him to Grimsby Town and Lincoln City, managed England from 1990 until 1993 and also had two spells in charge at Aston Villa and Watford, as well as managerial tenures at Wolverhampton Wanderers and Lincoln. In recent years he had worked as a pundit on the BBC and BT Sport.

“With the greatest sadness, we have to announce that Graham passed away at his home early this morning of a suspected heart attack,” read a family statement. “The family are devastated by this sudden and totally unexpected loss.”

A statement from the Football League added: “We are extremely saddened to hear Graham Taylor has passed away. A genuine legend of the game. Our thoughts are with his family.”

Taylor had a difficult time in charge of the national team, with criticism about his perceived long-ball game. However under his leadership England qualified for Euro 92 in Sweden.

The tournament was a tough one for England and their manager. His side failed to get out of their group and Taylor also substituted Gary Lineker, in the final group game when a goal was needed, in what proved to be the striker’s final game for England.

Taylor kept his job, but failure to qualify for the 1994 World Cup in the United States led to his resignation in November 1993.

One of his former England players, Alan Shearer, was among the first to pay tribute.

Shearer tweeted: “Completely shocked by news of Graham Taylor. Always held him in the very highest regard — the man who gave me my first england cap. So sad.”

Devestated to hear of Graham's sad passing, what a gentleman. In my darkest days himself and Rita were always there for me #RipGrahamAHero

The FA tweeted: “We are deeply saddened to learn of the passing of former England manager Graham Taylor.”

A tweet from the LMA, which Taylor served as president, read: “The LMA is deeply saddened to hear that former England Manager & the first President of the LMA Graham Taylor OBE has died at the age of 72.”

Taylor began his career in football as a player with Grimsby before having a spell with Lincoln and then moving into management with the latter club.

A tweet from Grimsby read: “We are saddened to hear of the passing of former GTFC player & England manager, Graham Taylor. Our thoughts are with Graham’s family.”

Taylor took charge at Villa following their relegation from the First Division in 1987 and restored them to the top flight at the first attempt. Two years after that, in 1990, they finished runners-up to Liverpool in the First Division.

That achievement was instrumental in securing him the England position.

He later came out of managerial retirement to take charge of Villa for a second spell in 2002.

A tweet from Villa read: “We are deeply saddened today by news of the death of our former manager Graham Taylor. RIP Graham. #AVFC”

He wrote: “I am deeply saddened and shocked to hear about Graham’s passing. He was like a brother to me. We shared an unbreakable bond since we first met. We went on an incredible journey together and it will stay with me forever.

“He took my beloved Watford from the depths of the lower leagues to unchartered territory and into Europe. We have become a leading English club because of his managerial wisdom and genius.

“This is a sad and dark day for Watford. The club and the town. We will cherish Graham and drown our sorrows in the many brilliant memories he gave us.

“I love you Graham. I will miss you very much.

“My thoughts go out to Rita, Joanne, Karen and the whole Taylor family. watfordfcofficial #GrahamTaylor #RIP.”

Taylor’s achievements with the Hornets were remarkable. After taking charge in 1977, he led the club from the Fourth Division to the top tier.

They finished second in the First Division in 1983, qualifying for the UEFA Cup, and reached the FA Cup final the following year. He had a second spell at Vicarage Road from 1996 to 2001.

Watford’s present chairman and chief executive Scott Duxbury said: “As one, together at our club, we are all utterly devastated to learn of Graham’s passing.”