Amber Barrett hoping hard work will pay off with Ireland 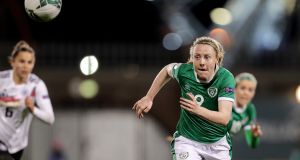 Amber Barrett says she is happy to see Vera Pauw renew her contract as Republic of Ireland manager despite having not fared especially well herself under the Dutch coach over the course of the recently concluded European Championship qualifying campaign.

The 25-year-old from Donegal featured in five of the team’s group stage matches, starting just once and was given just four minutes in Ukraine where Ireland desperately needed a goal to salvage their hopes of making the play-offs. Despite enjoying some good form at Köln around that time, however, Barrett insists that she does not feel hard done by.

“Of course I want to play but it’s not that Vera has this issue with me,” she says while promoting a Spar-sponsored programme of primary school lessons for the FAI. “The fact of the matter is that for the majority of the campaign Rianna (Jarrett) was training better than I was. Of course I was doing well at Köln last year and bringing that into training but the thing is, to get into the starting 11 for the international team is a much more difficult thing than getting into a club team.

“Your window for training is so small and it’s such a short opportunity and you might not have that much time in training showcase what you can do. The game plan is different for every team. How are we going to set up? And you have to look at what players you have available for that.

“Any time I ask Vera what I need to do she is always very clear with me and with everybody about what we need to work on. Every player takes that away so it definitely isn’t something that I hold any grudges about. I just have to be better and it is something I am always working towards.”

Though she is unsure about her longer term future at the German club, she has helped Köln to a strong start in the league as they look to win promotion straight back to the top flight with three goals in as many games, all of them won.

“Yeah, our league starts back now on the 21st of March,” she says. “Then we have 13 games to go through but we have probably played three of the toughest games. And after winning the three of those I think the frustrating thing is the (coronavirus-related) break and losing the momentum.”

Her agent is already in talks about whether she might stay on next season but she is convinced that wherever she is playing by then she will be a better player for the experience is getting at the moment.

“It is a cliché,” she says, “but every day I got into training and I take something from it. I am very lucky that I have players on my team who have won the Women’s Champions League, the German league and German Cup.

“These are players who have played with some of the best players in the world and who have been successful. Seeing how they put themselves about in training, how they act, the little extra bits they do, it has made me aware of things I need to get better at.

“My hold-up play is something I work on every day,” she continues. “As a striker, as well as running in behind, which I’m good at, I need to be able to hold the ball, lay it off and bring others into the game, and make it difficult for defenders.

“The physicality of it, it’s elite. You are running and running. It’s being able to withstand that. Thankfully, being exposed to that in training helps when you go out to games. Honestly, every day I am taking something away from it. I am still working on my heading ability, which is non-existent at the minute but over the next few months a lot of these things will come together.”

*The SPAR/FAI school is a digital learning platform zone for teachers and parents of primary school children in 4th, 5th and 6th class. You can register by visiting Register | Football Association of Ireland