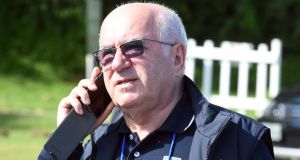 Fifa has asked the Italian Football Federation to investigate comments made by Carlo Tavecchio, the favourite to become its next president. Photograph: Claudio Villa/Getty Images

Fifa has asked the Italian Football Federation (FIGC) to investigate comments made by Carlo Tavecchio, the favourite to become its next president, in which he referred to African players as “banana eaters”.

“Media reports concerning alleged racist comments by one of the presidential candidates for the Italian FA have alerted Fifa’s Task Force against racism and discrimination and its chairman Jeffrey Webb, ” Fifa said in a statement on Monday.

“As such, Fifa has written a letter to the Italian FA asking it to take the appropriate steps to investigate and decide on this matter and report to Fifa.”

FIGC vice-president Tavecchio has received a wave of criticism for his comments, which came at the summer assembly of Italy’s amateur leagues (LND).

He suggested that Italy should replicate England’s stringent requirements for non-EU players.

“In England, they identify the players coming in and, if they are professional, they are allowed to play,” said 71-year-old Tavecchio.

“Here instead we get ‘Opti Poba’, who previously ate bananas and then suddenly becomes a first team player with Lazio.

“That’s how it is here. In England, you need to demonstrate what you have on your CV and your pedigree.”

Tavecchio apologised twice for his remarks but gave no indication that he will end his candidacy for the FIGC presidency.

The pair are vying for the position left vacant by Giancarlo Abete, who stepped down immediately after Italy’s embarrassing early exit from the World Cup in Brazil.

On Sunday, the first signs of a crack in the strong support for Tavecchio from Serie A and B clubs came from Fiorentina, who said that he should step aside.

“Staying true to its civic and ethical values, Fiorentina, in the light of the recent comments made by Tavecchio, no longer considers his candidacy for the presidency of the FIGC sustainable,” the club wrote in a statement.

The new owner of Sampdoria Massimo Ferrero also said that Serie A owners should get together to discuss the situation.

“Club owners need to hold a meeting as soon as possible to assess our position (on Tavecchio’s FIGC candidacy),” he said.