‘I believe in this team and I believe that we will compete until the end again.’ 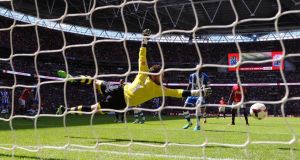 Robin van Persie is certain that Manchester United will compete for the Premier League title this season after his two goals won the Community Shield this afternoon.

The champions beat Wigan 2-0 at Wembley this to secure David Moyes’ first trophy as a senior manager after a rocky pre-season campaign.

No major signings and speculation over the future of Wayne Rooney has led to an unsettled summer at Old Trafford but Van Persie is confident United will be in the hunt for silverware come the end of the season.

Over 80,000 fans flocked from Lancashire to London this afternoon and the Dutchman was pleased to get on the scoresheet via a spectacular header and a second-half deflection.

“It’s always nice to score, especially at Wembley,” he said. “It’s a great day for the fans, for us and for the manager as well. All of us.

“One day, one game and we’ve won a trophy so it’s good. I’m really glad for everyone.” He added: “Last year I scored a couple of headers, not too many so I have to improve on that. I think it went in quite nice.”

Ryan Giggs was quick to praise Van Persie’s performance and knows the former Arsenal man will be a key player in the coming months.

“The first goal’s a brilliant goal,” he said. “It just went over my head and the timing was brilliant and it was a great start for us.

“We hope Robin can produce the form that he showed last year.”

The Red Devils claimed just two wins in pre-season before today, conceding 13 goals in seven games, and Giggs was pleased with the solidity on display against the Latics.

“It was a very professional performance,” he said. “We were a bit disappointed pre-season, letting a few goals in, so the main objective was to get a clean sheet. We wanted to do that as a team. Work hard, get behind the ball and I think we did that.”

He added: “We just know we’ve got good players in the team. It’s always hard when you’re champions, you’ve got to reproduce the form that you showed last year and I hope we do that.”