Szczesny happy for Arsenal to win ugly for now 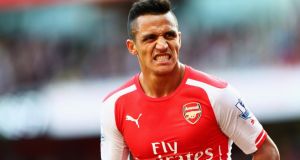 Goalkeeper Wojciech Szczesny is happy for Arsenal to win ugly, but knows they cannot afford too many costly defensive relapses if they are to challenge for the Barclays Premier League title.

The Gunners came from behind to beat Crystal Palace 2-1 at the Emirates Stadium on Saturday through a dramatic stoppage-time winner from Aaron Ramsey, which denied the managerless Eagles what would have been a well-deserved share of the points on the opening day of the new campaign.

Despite all of their attacking potential, with €35 million summer signing Alexis Sanchez making his Premier League debut, Arsenal were again undone by some all-too-familiar slack defending as Brede Hangeland guided a near-post corner into the opposite corner, where there was no player on the line.

Arsene Wenger’s side managed to level before half-time when Laurent Koscielny flicked home a deep free-kick from Sanchez, but then struggled to break down a determined Palace side.

Finally, though, Arsenal were able to open up the visitors, who were reduced to 10 men after a second caution for winger Jason Puncheon, when Mathieu Debuchy’s shot from a knockdown by substitute Olivier Giroud was saved by Julian Speroni, only for Ramsey to lash the loose ball in from close range.

“Maybe it was not the most beautiful of games, going 1-0 down we had to respond, but we will take the three points,” Szczesny said. “We conceded to another piece which was not very good, although it was a good delivery and a great header, so that is something we can hopefully improve on.”

Sanchez showed some positive touches, albeit without setting the match alight. Wenger is confident the Chile forward will soon grow into his new surroundings.

“I am very happy with his attitude because he kept on fighting for 90 minutes, even if he is not completely ready physically,” said the Arsenal manager. “Tactically he needs to improve his understanding with his partners but he looked lively and dangerous until the end.

“I am happy with his overall attitude and performance.”

Arsenal, who are said to be closing in on Olympiacos centre-back Kostas Manolas, head to Istanbul on Monday ahead of their Champions League play-off first leg against Besiktas.

Full-back Kieran Gibbs will be assessed after limping off early in the second half with what looked like a hamstring problem.

Midfielder Mathieu Flamini missed the Palace match through illness but could yet be well enough to travel. Szczesny is confident Arsenal can get a positive result at the Ataturk Olympic Stadium, having beaten Fenerbahce 3-0 in Istanbul at the same stage of the competition last season.

“We love important games, so we can’t wait to go to Turkey. It will be a good atmosphere,” the Poland goalkeeper said. “We did really well in Istanbul last season, so will be out to do the same thing over again.

“The crowd is fantastic for the home team but they were out there last year too, so hopefully we can do it again.”