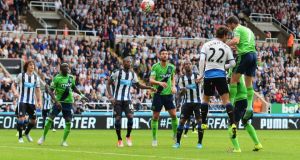 At the final whistle Steve McClaren strode out to the centre circle to applaud his new public. The politely understated way in which Newcastle United supporters clapped him back was probably an accurate refection of a cautiously optimistic mood, clouded by the odd caveat.

On this very early evidence his team promise to be much more attractive to watch than last season and Georginio Wijnaldum and Chancel Mbemba look good signings. Less positively, Fabricio Coloccini was, once again, all over the place and Alesandar Mitrovic looks a young man in need of Alan Pardew’s old anger management counsellor.

Southampton can play a lot better than this but may be consoled by the reality that they almost stole all three points in the dying minutes.

They began in less than convincing mode. Indeed Graziano Pelle had barely had a touch before he headed Southampton into a slightly underserved lead. Connecting with Cedric Soares’s cross, Pelle showed off immense skill in guiding a glancing header towards the bottom corner. The ball’s trajectory made things extremely tricky for Tim Krul who touched but could not hold it as an all too familiar feeling of pessimism engulfed the Gallowgate End.

Within minutes McClaren had left his executive box seat alongside Mike Ashley, Newcastle’s owner and Lee Charnley, the chief executive , and was en route to the technical area. If his initial pitch-level view seemed a little alarming the outlook had improved appreciably by half-time.

Granted, the otherwise impressive home debutant Mbemba at times found himself bullied by Pelle in the air but much of Newcastle’s new found enthusiasm for building from the back had been encouraging. Most significantly they were stretching Southampton’s defence to breaking point.

It finally snapped when Massadio Haidara’s cross took a deflection off Sadio Mane and, with Maarten Stekelenburg thoroughly wrong-footed, Papiss Cisse was able to head the equaliser from close range.

Rumour has it Cisse may be sold should Charlie Austin finally complete a long mooted move from QPR to Tyneside but the Senegal striker looked a man fully committed to his current cause and proved it by helping create Newcastle’s second goal.

The new half had barely started when Cisse’s chipped pass picked out Gabriel Obertan who needed no invitation to accelerate down the right before providing the on-rushing Georginio Wijnaldum with an excellent looping cross.

The €20.75 million signing from PSV Eindhoven read it well, evading Stekelenburg’s reach thanks to his careful placement of a header into the top corner. It was the sort of finish entirely in keeping with Wijnaldum’s influential debut. If his set piece delivery was not exactly top notch, the Dutchman’s change of pace as he burst out of midfield persistently discomfitted Southampton.

An arguably even bigger worry for Erwin Koeman – Southampton’s assistant manager and the man in temporary charge after his brother Ronald underwent surgery to repair a ruptured Achilles tendon on Friday – was Moussa Sissoko.

Yet if Matt Targett was given a thorough work out by Sissoko’s pacey, powerful right wing advances a rather more surprising feature of the afternoon was Obertan’s impact in a generally left-sided role in Newcastle’s 4-2-3-1 formation.

Words such as controlled and measured have not always been synonymous with Obertan but he was enjoying one of his better days. The same could not be said of the side who finished seventh last season but, much as aspects of their performance must have disappointed the Koemans, Southampton were never exactly out of things.

Early in the second half Krul had been forced to extend a foot to prevent Maya Yoshida scoring while, the first period had seen the Dutch goalkeeper tip Dusan Tadic’s shot round a post.

Of equal importance was the reality that a below-par performance from the distinctly off the pace Colocinni alongside Mbemba at centre half always offered the visitors a glimmer of hope. To be charitable Coloccini missed much of pre-season with an Achilles injury but some Tynesiders will doubtless the club’s wisdom in granting him a contract extension.

Erwin Koeman was given fresh hope as Tadic’s fine cross permitting substitute Shane Long to head beyond Krul. The Republic of Ireland international was on for a tiring Jay Rodriguez, warmly welcomed by Southampton fans as he started his first game after spending more than a year out injured .

By then McClaren had brought Aleksandar Mitrovic on for Cisse. The physically imposing Serbia centre forward did not take long to show everyone why his new manager says he has “a bit of the devil in him”. Indeed Mitrovic was booked for a wince inducing foul on Targett before he had even touched the ball and, later, was lucky to escape unpunished for a rather naughty elbow.

If Mitrovic clearly has the potential to make Cheik Tiote appear a shrinking violet, at least Mbemba and Jack Colback showed off rather more positive traits, both players making vital late interceptions to prevent first Pelle and then the dangerous Sadio Mane securing all three points for Southampton.