Schurrle sees off Fulham with hat-trick 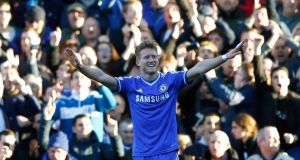 German midfielder Andre Schurrle netted a second-half hat-trick to keep Chelsea top of the Premier League with a 3-1 win in the west London derby at Fulham, who remain bottom.

Chelsea boss Jose Mourinho had been concerned a gruelling midweek Champions League trip to Istanbul would leave his players fatigued for the short journey down to Craven Cottage.

However, despite a slow start, the Blues, driven on by brilliant Belgian midfielder Eden Hazard, blew Fulham away with three goals in the space of 16 minutes following the restart to stay clear of Arsenal and Manchester City in the championship race.

For Fulham boss Felix Magath, there remains plenty more hard work ahead if his side are to pull clear of trouble, and had only a consolation goal from John Heitinga to show for their spirited efforts on Saturday afternoon.

It had earlier been a bright start by the home side in some welcome sunshine.

Pajtim Kasami’s cross from the left was flicked wide by Clint Dempsey, when a proper contact from the American could well have put the ball in the net.

There was a brief stoppage when Fulham defensive duo Kieran Richardson and Brede Hangeland clashed heads on the half-way line. After some treatment, both men were able to continue.

On 12 minutes, Fulham goalkeeper Maarten Stekelenburg delayed clearing a deadball, which saw him closed down by Fernando Torres, retained in the starting XI after his midweek goal in Turkey.

The ball ballooned back up off the Chelsea striker and into the penalty area, but Torres could not make the most of the gift, as he miskicked and then eventually sent a scuffed cross-shot wide.

Fulham had to make a change shortly afterwards as captain Hangeland was unable to continue, and replaced by Dan Burn.

On 20 minutes, Richardson got away again down the left and his deep cross picked out Dempsey, but John Terry and Gary Cahill were quick to close the Fulham striker down as he shaped to shoot.

Neither side were able to gain much possession in midfield, with some niggling tackles flying in.

With five minutes to go until half-time, Fulham tried a well-drilled free-kick from 25 yards which saw three players run over the ball before Kasami sent in a low drive, which Petr Cech got down well to save.

Steve Sidwell then drove an angled shot over the crossbar after a deep ball from the right dropped at the back of the six-yard box.

However, it took a fine reaction save from Stekelenburg on the stroke of half-time to keep the scores level when he deflected an angled drive from Torres over the crossbar.

Chelsea were on the offensive again at the start of the second half, as Schurrle saw a curled effort deflected wide, when Oscar was free on the overlap.

The German, though, made no mistake a few moments later when he fired Chelsea ahead on 52 minutes.

Hazard — on his 100th Chelsea appearance — chipped a ball down the right, which Schurrle, signed from Leverkusen in the summer, took in his stride with a superb cushioned header. A darting run saw him surge past Burn and to the edge of the Fulham penalty area, where he coolly slotted the ball under Stekelenburg.

Hazard almost crafted a second with a lovely reverse-foot chip to the far post where Richardson just got there ahead of Torres.

It was, though, 2-0 on 65 minutes, with the Belgian playmaker again the provider as his slide-rule pass split the Fulham defence as Schurrle slotted in his second from 12 yards.

Despite having the game won, Chelsea remained ruthless in attack and Schurrle completed his hat-trick on 68 minutes.

Torres brought down a long ball from the goalkeeper, which he flicked on out to Schurrle, who sprinted clear to the edge of the Fulham area before slamming a low shot past Stekelenburg.

Fulham at least salvaged some pride from the derby when defender Heitinga bundled the ball in from a corner by Lewis Holtby with 16 minutes left, but it was too little too late.