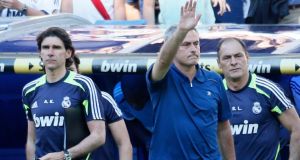 The Premier League has apologised to Chelsea after an article which appeared to confirm Jose Mourinho as the club’s new manager was published on its official website.

The article, headlined ‘Jose Mourinho makes Chelsea return’, was published with Monday’s date on it and has since been removed from the premierleague.com website. A spokesman for the Premier League confirmed the article had been published in error.

Mourinho, who managed Chelsea between 2004 and 2007 and led them to back-to-back Premier League titles in 2005 and 2006, is widely expected to return to Stamford Bridge and last night took charge of his final match as Real Madrid boss.

A Premier League spokesman said: “It was a publishing error. We took it down as soon as we were notified of it, and we’ve spoken to and apologised to Chelsea.

“We have no prior knowledge of any movement or any announcement (regarding Mourinho).”

The article’s sub-header read ‘Portuguese coach back at Stamford Bridge after signing a XX-year contract’, and the Premier League indicated it was an article which was being prepared in anticipation of a possible announcement.

The Premier League is trying to ascertain whether the publication of the article was the result of a system failure or human error.

The Mourinho era at Real ended on Saturday night with a 4-2 win over Osasuna in the Primera Division, with the Portuguese having already confirmed he would leave the Spanish giants at the end of the season.

In a statement to the club’s fans published on the Real website on Friday, he said: “I wish everyone associated with Real Madrid much happiness in the future.

“I appreciate the support of lots of fans and respect the criticism of others. Once again, a lot of happiness to everyone and, above all, good health. Hala Madrid!”