Once defining football, Manchester United and Liverpool now a footnote 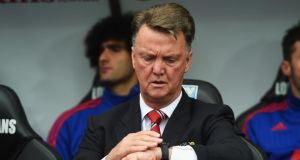 Manchester United face Liverpool at Old Trafford in what was once a defining match in football but is now waning somewhat. Photo: Michael Regan/Getty Images

There is a top-of-the-table match involving a team from Manchester on Saturday afternoon. Man City, first in the Premier League, are at Crystal Palace, who are second.

Meanwhile, in a game that used to define seasons, careers and lives, Manchester United host Liverpool.

Four matches in, it can seem premature to be considering United and Liverpool in the past tense, but as it stands it’s fifth versus seventh in the Premier League and who’s to say those will not be the placings come next May.

That we can address this historic fixture in such a way is a measure of the unconvincing start each club has made to the season. Superficially United, with seven points, are in a solid situation.

That’s three more than Chelsea and Louis van Gaal has (yet more) new signings to bed in.

But United have scored just three goals in four league games; even Sunderland have six. There is a stiffness to United’s play, something that was evident last season when Van Gaal was charged with rectifying the David Moyes months.

Then there was one task only – above all else, Manchester United had to get back into the Champions League. This they did. But it was at a cost. Having broken the British record transfer fee to bring Ángel Di María from Real Madrid, United then sold him 12 months later to Paris St Germain. Bought for £59.7 million, sold for £44 million. A loss of around £16 million. That’s a lot of Champions League corporate hospitality to sell.

And that is just one aspect of United’s Champions League return. There were tangible losses elsewhere – Falcao’s loan fee and £265,000 per week wages, conceding five at Leicester, three at Everton, losing in the FA Cup at home to Arsenal.

And there was this other loss, of spontaneity, of joy, of what we understand to be United’s style.

From Busby to Ferguson, whether 100 per cent correct in detail or not, we perceive Manchester United as exciting. They possess power and status as well, of course, but we when thought of United, a red blur dashed across our minds.

What do we think now? Goalkeeper, possibly David De Gea, passes to defender who makes obvious pass to midfielder with his back to goal, who returns the ball to defence. Spread wide. Return to middle. Circulate ball again for the sake of it. Repeat until fade.

This is why players ask questions of managers.

Once upon a time this strategy was different and it was Dutch, holistic and all the rest of it. But planet football saw that, adapted and learned to cope. Then Barcelona, post–Van Gaal, altered it to mesmeric effect but with the key, un-ignorable fact that Lionel Messi was on end-product duty.

Man United don’t have a Lionel Messi, no one else does. His presence changes everything about this system because he can transform it from possessive and flat to penetrative and fast.

United, like many others, need to find a different way to play but we are in a coaches’ world, where formations are feted over instinct and natural ability. Van Gaal is a big beast here.

Brendan Rodgers is not quite on the same plateau but he is another coach-manager who likes to give the impression that coaches can control matches from minutes one to 90. They can’t. Rafa Benítez couldn’t, Andre Villas-Boas couldn’t. Micro-managing suggests a lack of trust and intelligence.

It can alienate players and, as Steven Gerrard demonstrated in his 38-second appearance the last time the two clubs met, the major factors in English football are human nature, personality, environment, history, the crowd. The coach cannot control these.

Something the coach can control, if truly in charge, is transfer policy. United have just spent an initial £36 million (€49 million) on Anthony Martial from Monaco. Martial will be 20 in December. This week Van Gaal described the fee – which could rise a further £22 million (€30 million) – as “ridiculous”. He then said that the French teenager is for the next United manager, not exactly an endorsement.

Liverpool were unable to retain Raheem Sterling, an indication of where they are in the scheme of things, and spent a chunk of the money received on Christian Benteke. As others have pointed out, Liverpool sold Andy Carroll because they wanted to play a certain way. Does acquiring Benteke not contradict that?

Liverpool have scored a goal less than United. Benteke has got one of the two. It came in a most fortunate win over Bournemouth. Benteke has been praised yet there have been basic errors in his play.

Philippe Coutinho has Liverpool’s other goal, against Stoke. Coutinho is the brightest spark of Rodgers’ signings but his transfer to another agent in March – Kia Joorabchian, of Carlos Tevez third-party ownership fame – has probably been noted at Anfield. For Coutinho to depart like Luis Suárez and Sterling would add to an impression that, in modern European terms, Liverpool are a Europa League club.

Coutinho misses the trip to Old Trafford. He was sent off in the 3-0 home defeat to West Ham. The following day, United lost 2-1 at Swansea.

So both clubs, both managers, both sets of players enter the game on the back of defeat. Neither team is flowing, the pressure is on and the notion that there is better fare at Selhurst Park is nigh on baffling.