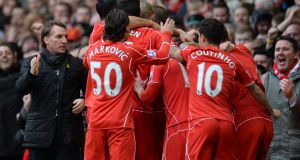 Left out of Melwood, past Tesco, through Stockbridge Village, on to the M57 and home to Formby.

Brendan Rodgers remembers every detail of his daily commute as Liverpool manager and precisely where it all came to an end four years ago yesterday.

There is not a trace of resentment as he recalls the sliding doors moment that steered him and Liverpool towards more successful futures apart, and Jürgen Klopp into that same Formby residence six weeks later.

“I was in the car and coming through Stockbridge Village when I got the call from [Fenway Sports Group president] Mike Gordon, ” says Rodgers, who marks the anniversary by taking his third-placed Leicester team to Anfield today.

The Hillsborough memorial service in 2016 aside, it will be his first visit back to the club he managed for 40 months and 166 games since being dismissed after a 1-1 draw with Everton on October 4th 2015. The team coach had returned to Melwood from Goodison Park for players and staff to collect their cars. Moments later, Gordon dialled with the bullet.

“People probably knew about it before me because I’d been asked a couple of weeks before if the end was near,” Rodgers says.

“I understood. Listen, the owners were brilliant for me. I really have to say that. I had many calls late at night with Mike and his enthusiasm and his hunger for the club to succeed was great.

“The support they gave me as a young manager at a big club, and they were still learning as well – I think they realised later on that if you do need a centre-half or a goalkeeper you have to pay the money and get him in – they gave me everything. So when Mike rang it was okay. I thanked him for giving me the opportunity. I understood. It [the sack] maybe could have come in the summer. It didn’t and we continued to work and when the owners decided to change that was just part of football.”

That Sunday night Rodgers flew to Marbella on a planned vacation during the international break with his future wife Charlotte. His mood was not helped by several days of incessant rain in Spain nor when he was photographed asleep with his mouth wide open on the flight back by a fellow EasyJet passenger.

The misery of losing his job did not, however, prevent Rodgers from helping his successor to settle on Merseyside by inviting Klopp and his wife Ulla to view the house they continue to rent from him.

“The girls looked round the house while we had a cup of tea and a talk about football,” says Klopp’s landlord. “What we said is private but he is a good guy with perspective on life. He has been great for the Premier League. ”

Rodgers’ tenant recalls: “We spoke mainly about the house. It was about six weeks after he left so I knew the team by then. He was not at all frustrated. He took it like a man.”

No one, not even Rodgers it seems, disputes the merits of FSG’s decision to change course in 2015. The 46-year-old from Carnlough returned to the Premier League as a winner in February having lifted every available domestic trophy during his time with Celtic before his acrimonious exit.

But there is surely regret at how his work at Liverpool unravelled after he went closer than any manager in 24 years to bringing the league title to Anfield 17 months earlier?

The Leicester manager admits: “You can always think we could have been better or done things differently but it was just how it evolved. We had set an expectation that we could challenge but then we lost a world-class player and even though we were very much all about the team, Luis [Suárez] was very much part of that.

“Obviously the disappointment was not being able to sustain it but sometimes that’s how it works out for you. You learn from that. We were in a similar situation here at Leicester in the summer. We lost one of our top players when Harry [Maguire] went to Manchester United but the experience back then helps me deal with this better.

“You know you have to do the best for the player and the club and if he ends up going then don’t take it personally. You make sure the team is stronger for it. It maybe didn’t work out for us back then but it helped me moving forward.”

And does he allow himself to think of what might have been but for that infamous slip-up against Chelsea during the 2013-14 title race?

“Just from time to time; I don’t burden myself with it,” Rodgers says. “I believe we did everything we possibly could but fell short. We were second and had an opportunity to win but didn’t take it – it’s as simple as that.

“Over the course of 38 games, if you don’t win the league you don’t deserve to win it. We have so many happy memories from that season. But do I think about it? Yes, from time to time it will come to me.”

Recruitment was a recurring problem during Rodgers’ time at Liverpool, with the young, driven manager often at odds with the transfer committee that has worked so successfully alongside Klopp.

And it is here, perhaps more than in any other facet of management, that Rodgers differs from the 39-year-old who walked into one of the biggest jobs in world football in 2012.

FSG’s restrictions on the age of transfer targets was one source of irritation for the former Liverpool manager, who wanted to exchange Jordan Henderson for Fulham’s Clint Dempsey at the start of his tenure. Pushing for Christian Benteke, while appearing unsure how best to maximise the glorious gifts of Roberto Firmino, was another head-scratcher during Rodgers’ reign. The conflict, he maintains, would not happen now.

“What experience has given me is I’m much more relaxed now on that front,” he says of transfers.

“My strengths are managing players and coaching players. As a modern manager at the top level it’s very difficult to have the time to go out looking at players. I know what my strengths are, and when I come into a club I try to make it clear in terms of the type of game I want to play. Then you put your trust in your recruitment team and the club to get the players in.

“Going back to Liverpool, I think it was a learning aspect. I was a young manager back then and the board were new to it as well. We had a strategy and that was how they worked and I was part of the process. You couldn’t see whether it would work or not. But afterwards they knew they could spend on a senior player or a top goalkeeper, and of course that clearly helped, but you have to go through that process of learning.”

Everyone, it appears, is better for it.

Reality Bites - Tales of the new normal: Andrew Coscoran 11:41
Marcus Rashford fighting to keep free meals on the menu for children 10:56
Shane Lowry: Global nature of golf could cause issues when game returns 10:45
All in the Game: Belarus plough ahead despite global pandemic 10:00
The Offload: Sports stories from the frontline 10:00