Manchester City cling on at Watford to keep up blistering pace 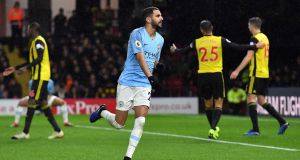 Even for a team as relentlessly dominant as Manchester City, a sequence of 13 matches in 44 days does throw up the risk of fatigue. Luckily for Pep Guardiola the luxury of rotation comes easily to a squad replete with talent.

Like a member of the Magic Circle performing tricks with a subtle sleight of hand, six of the starting selection that cantered past Bournemouth on Saturday moved out of the picture, replaced by a new set. Now you see Raheem Sterling, Aymeric Laporte and Ilkay Gündogan. Now you don’t. Now you see Vincent Kompany, David Silva and Riyad Mahrez instead. See what he did there?

City being City, half a team’s worth of switches led to no great discernible change in the overall pattern of play, collective confidence and end result. They reimposed a five-point lead at the head of the Premier League, reloading the pressure on the chasers. They inflicted a fourth home defeat from their past five here for Watford, which is a worry for Javi Gracia but if there is ever a fixture to shrug and accept unstoppable punishment, this is it.

Ben Foster must have suspected he would be in for a busy evening and he began in inspired form. Confronted by the sight of Leroy Sané gliding purposefully towards goal, he rushed out and did enough to avert major damage. Watford’s keeper showed wolfish persistence to produce a miraculous triple save in the 18th minute. City looked odds on to score when Kompany slipped an inviting pass for Mahrez. When Foster blocked Bernardo Silva appeared for the follow up – smothered – before David Silva ran into the super-determined keeper. Foster’s sharp reactions were excellent.

Foiled three times in a matter of seconds, City could perhaps spend half a second wondering whether it might be one of those almost impossibly rare nights.

Even though the early season confidence that coursed through Watford has dimmed, and they played with understandable caution, there was a sudden surge of excitement among the faithful when they found moments to show a flicker of ambition. Early on, Troy Deeney sparked an advance down the left flank. Roberto Pereyra picked up the ball he jinked into position and swept in a shot. It did not trouble Ederson but did give City a gentle reminder that being overly casual might cost them occasionally.

On the half-hour mark Watford carved themselves a genuine chance to take the lead. Abdoulaye Doucouré flicked the ball over his head and it arced perfectly into Deeney’s path, in the clear for one on one. The crowd gasped. The forward steered his shot straight and Ederson grabbed hold of it.

The moment passed and CIty began pressing again. Six minutes before half-time Watford’s resistance was broken in uncommon fashion by Sané. City were probing, and when Foster saved from David Silva and the ball was recycled again Mahrez spotted the German on the far side. As the ball was floated over Sané improvised to deal with the height it arrived at in the most efficient manner by sending it past Foster with a jut of cushioned chest control.

City extended their lead just after the break and the goal was symbolic of how they are able to force errors in opponents who look like it is hard to breathe when the blue shirts start to turn open space into dead ends. Watford had a throw in their own defensive third and City simply gobbled it up. Silva threaded the ball to Gabriel Jesus, whose cross was guided past Foster by Mahrez.

The mood inside the ground shifted as the sense of certainty descended.The inevitability of victory infused City with even greater dominance.

Watford more or less accepted their fate. City began to toy with their hosts. Some of the footwork on display from Sané, David Silva and Mahrez in particular was breathtaking. There was almost sympathy for Jesus, whose low confidence and spurning of chances in front of goal really stood out.

With six minutes remaining, the temperature of the game swung unexpectedly. Pereyra stole possession from Fabian Delph and Watford had enough bodies in the box to upset City’s defence. Doucouré’s determination ensured he bundled the ball in to set up a tense finale.

Watford piled forward with renewed hope and Guardiola sent on defensive reinforcements to try to cope.

The City travelling circus moves on to the more challenging task of Chelsea at Stamford Bridge on Saturday. Sergio Agüero’s tight muscles prevented him from travelling to Hertfordshire and a handful of others are fairly well rested in case Guardiola feels minded to pull off another magic trick. Given the strangely complex ending to this game, he might need one.

1 Stephen Kenny: ‘I want people to come and look forward to watching this team’
2 No Masters, so Tiger Woods battles son Charlie for green jacket
3 Conor McDonald: ‘People in fitness industry need to be careful what they put online’
4 Cheltenham cited Boris Johnson’s Twickenham trip as a reason for Festival green light
5 Germany well ahead of the curve as Bundesliga gears up for return to action
Real news has value SUBSCRIBE