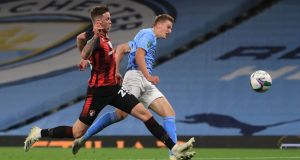 Liam Delap admitted he was “buzzing” after scoring a superb debut goal in Manchester City’s 2-1 Carabao Cup victory over Bournemouth.

The 17-year-old son of former Stoke and Republic of Ireland midfielder Rory put the holders ahead in Thursday’s third-round tie with a fine 18th-minute strike from just inside the box at the Etihad Stadium.

With Sergio Agüero out injured and Gabriel Jesus rested, the youngster grabbed the chance to impress as City, bidding for fourth successive win in the competition and sixth in eight years, booked a fourth-round trip to Burnley.

Delap said: “I was buzzing, obviously, to get the call up – it was a dream come true. To top it with a goal, I can’t ask for much more. I’ll probably be smiling for a couple of weeks.”

Despite falling behind to Delap’s effort, Bournemouth responded well and levelled within four minutes through Sam Surridge.

In the end it took a 75th-minute winner from Phil Foden, tucking home after Riyad Mahrez hit the post, for the hosts to secure victory.

He said: “We see him in training and he scores a lot. He’s a striker we don’t have – strong and good in the air. We have a lot of confidence with him for the future.”

Liverpool manager Jürgen Klopp admits they “will have some fun” with Curtis Jones after the youngster starred in their 7-2 third-round victory over Lincoln.

The Toxteth-born 19-year-old scored twice to help take the game beyond their hosts before half-time and dictated play from midfield like an experienced pro.

Klopp has introduced the teenager gradually to his first team but he looks set to play a more involved role this season.

“There is still space for improvement but everyone knows my opinion of Curtis Jones, he is an exceptional talent and we will have some fun with him I am pretty sure in the future.

“Both goals were difficult, the second one the first touch was absolutely exceptional between two opponents and then he opens up and sees the opportunity and finishes it off.”

Xherdan Shaqiri, somebody who has become something of a fringe player in the last 18 months and would be one of the men Liverpool would be happy to offload, opened the scoring with a superb free-kick and had a good game in midfield.

Klopp offered some hope to the Swiss, and the likes of Divock Origi who scored an 89th-minute goal to round off the scoring but was relatively ineffectual apart from that, as he insisted the door is not closed on anyone’s career.

“Everyone used the opportunity to show up, that is very important,” he said.

“My door is always open and if a player shows desire – because they all can play football – that is why they are at Liverpool. There are a lot of games in the season.

“They showed desire, we saw attitude tonight, so many things of what I like and what we want to see from a Liverpool team.

“Really a lot of good things and that is why we came here, we wanted to win but we wanted to play good as well and I saw a good game.”

Traore needed only 14 minutes to get off the mark on debut with Anwar El Ghazi and substitute Ollie Watkins also on target in a 3-0 win at Ashton Gate.

The 25-year-old made just four Premier League starts at Chelsea before joining Lyon in 2017, but he has returned from France as a £17million player.

“It was important for him to get off to a great start,” said Villa assistant manager and former Chelsea captain Terry, who saw Traore in his formative years at Stamford Bridge.

“We saw that with Emi [Martinez] save a penalty on the weekend and he [Traore] is someone who hasn’t played in a while as well. So to get the goal and top it off was good.

“He was someone at Chelsea who was very hungry. He went away from the Premier League but he’s always had that desire to come back and prove himself.

“He’s got that opportunity now at Aston Villa and personally and professionally we’re delighted to have him.”