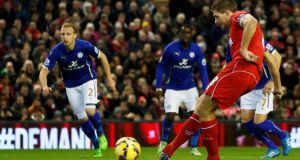 Defiance is a vital quality in a relegation battle and Leicester City had it in abundance against Liverpool. Controversially two goals down at Anfield, Nigel Pearson’s team fought back to secure a deserved point through David Nugent and Jeffrey Schlupp and deflated some of the momentum developing in Brendan Rodgers’s side.

Liverpool found themselves with a comfortable half-time lead that owed little to their own performance level and almost everything to the referee, Mike Jones, who penalised and infuriated Leicester in equal measure with two penalty decisions. The first was a joke and the second was justified, prompting a furious response from the visitors’ coaching staff towards the match official as he exited at half-time. Pearson was not among them. He was first down the tunnel, having been spoken to by a police officer.

Leicester’s grievance was arguably exacerbated by the fact they were the more enterprising side and should have been ahead when Jones pointed to the spot for the first time in the 17th minute. The impressive Riyad Mahrez, who scored the winner at Hull City that ended a run of six straight Premier League defeats for Pearson’s side, hit the woodwork after only 66 seconds with a free-kick that deceived Simon Mignolet at his near post. Mahrez then squandered a glorious chance to give the visitors the lead from Schlupp’s cross, slicing over from 10 yards after Kolo Touré failed to intercept the low delivery from the left.

Liverpool had struggled to string together an attack of note, their energy and intensity dropping from the highs of Monday against Swansea City, but were gifted a ludicrous penalty when Philippe Coutinho released Raheem Sterling into the area. The England international’s attempted cut-back struck Wes Morgan in the face as the Leicester captain, who was sent off in the 3-1 defeat by Liverpool last month, dived across to intercept. Morgan’s arms were outstretched but he took the ball full in the face. The referee who has the ‘beach ball’ goal against Liverpool among his litany of errors thought otherwise and Steven Gerrard, back in the starting line-up having been rested against Swansea, converted the penalty to the left of goalkeeper Ben Hamer.

Heads could easily have dropped, given Leicester’s position, but they continued to press only to be undone by a second Liverpool penalty. This one was legitimate. Three blue shirts backed off Coutinho as he weaved down the left and his flick into the area struck the raised hand of Danny Simpson. Jones called it right, Hamer dived the same way from the spot-kick but Gerrard went the other. Jordan Henderson then went close to a magnificent goal with a full volley from the Liverpool captain’s corner to the edge of the area, his effort flashing wide of the top corner.

Nugent replaced the injured Danny Drinkwater in the Leicester attack and should have pulled a goal back early in the second half with a free header from Matty James’s corner. That effort was glanced wide but the boyhood Evertonian made no mistake with a superb finish seconds later. A flowing passing move was rounded off in fitting fashion when James lofted a ball into the area, the tireless Jamie Vardy chested down to Nugent and the striker hitch-kicked a half volley into the far corner.

Leicester were deservedly level two minutes later, courtesy of another fine goal, this time from Schlupp, who was given too much space on the edge of the area and drilled a low finish inside Mignolet’s left-hand post.

Marcin Wasilewski almost won it for the visitors when Mignolet parried a corner to his feet inside the area but his shot was blocked. Henderson and Lazar Markovic could have done likewise for Liverpool, while Jones dismissed a third penalty claim when Fabio Borini tumbled under a challenge from Morgan.