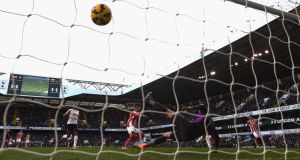 Home is not so sweet at the moment for Mauricio Pochettino. Tottenham’s troublesome sequence in Premier League matches at White Hart Lane continued as Stoke inflicted a fourth defeat out of five here.

The extent to which his Spurs team bore no resemblance to the style of football Pochettino encouraged at Southampton was striking.

From high-intensity pressing on the south coast to a kind of anti-pressing in north London. (Or perhaps, from a Spurs perspective, just depressing). Mark Hughes’s team were largely comfortable and eased into a two-goal lead they didn’t relinquish.

For five minutes it looked promising enough. Harry Kane got his long-awaited Premier League start and a special someone had jetted in to be in the audience. Jürgen Klinsmann, an iconic figure for Kane, is in London for USA’s match with Colombia, and was in attendance.

A Tottenham break in the third minute quickened excitement levels. Nacer Chadli looped a cross over to an unmarked Kane. The 21-year-old could not quite find the angle with his header though.

There were plenty of white shirts around him but most took the form of bystanders as Krkic advanced. The former Barcelona starlet tried his luck, and his shot ricocheted past Lloris.

The atmosphere began to get very tetchy, with the home support irritated at Begovic’s undisguised attempts to slow the game down to apparently protect Stoke’s lead – the keeper was booked midway through the first half. But of more serious concern was the overall disconnect inherent in the Tottenham performance. They struggled badly to show any cohesion or personality.

Stoke did not need to concern themselves with running down the clock when there were goals to be had. Having had the share of early chances, they scored again, taking up another open invitation offered by the Tottenham defence. Mame Diouf scampered up the right flank and the home backline had torn itself apart to give Irish international Jonathan Walters the freedom of the box. He steered in Diouf’s cross under all the pressure of a park kickabout.

On came Emmanuel Adebayor to team up with Kane. With a quarter of an hour to go, Tottenham crafted their first genuine threat of the second half. Lamela’s free kick was sweetly struck but Begovic responded to palm away superbly.

The White Hart Lane crowd erupted when Danny Rose’s cross travelled up and over to Chadli, and he rifled in a volley from an improbable near-post angle.

Adebayor glanced a stoppage-time header wide and that was that. The music blasted at a staggering volume come the final whistle to drown out any audible home disappointment. Stoke’s celebrations for a first away win since August could still be heard over the din. Guardian Service