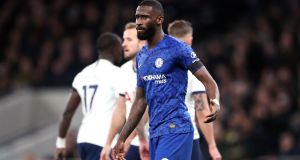 Chelsea defender Antonio Rudiger has called for anyone found to have subjected him to racist abuse to be swiftly punished - and for the fight against discrimination not to be “forgotten again in a couple of days”. Photograph: PA

An apologetic Jan Vertonghen condemned the behaviour of “minority idiots” after Chelsea’s 2-0 victory at Tottenham was overshadowed by the game having to be halted when Antonio Rüdiger was racially abused by a section of the crowd.

Spurs have vowed to take the “strongest possible action” against any individual found to have abused Rüdiger, who appeared to indicate he had been targeted with a monkey chant.

Anthony Taylor, the referee, stopped play after being alerted to the abuse of the Chelsea defender during the second half on Sunday and an announcement on the public address system informed the crowd that “racist behaviour from spectators is interfering with the game”. The announcement was made on two further occasions in line with Premier League protocols.

Racism has blighted English football over the last 12 months – the Professional Footballers’ Association has called for a government inquiry into a growing malaise – and the latest incident drew a furious response from Vertonghen.

“These things still happen and it is a disgrace and we need to be strong against them,” the Spurs defender said. “I have got no idea how people still, or ever, thought this way. Sometimes you think people are smarter than this. I’m very convinced it was just a minority but it is very wrong.

“I don’t know if it is getting worse. It shouldn’t be there in any way so I just can’t get my head around how people still do this. I’ve got no words for it. I apologise in the name of Spurs but like I said, these are minority idiots. We don’t identify with these people.

“The way I see it, it is still everywhere. In different countries where I’ve played there is nothing at all. To be fair I always see England as ahead in a multicultural society. That’s why I love London. That’s why I love the UK. I think they’re ahead of other countries. It hurts. It’s not just a problem in this stadium, in London or the UK. It’s everywhere in the world and it’s wrong.”

Vertonghen argued that the authorities need to implement stronger penalties for racist abuse. “I don’t know how you fix these idiots but this is an opportunity for the right people to act strong against them,” the Belgian said. “Not just this country. In Belgium, in Holland, in the countries where I watch football, it’s a problem everywhere and this is another opportunity to make a statement. My general feeling is that in England they act strong. Maybe they have to act even stronger. Outside the UK, I’m talking about Uefa, the FAs in different countries, they can do better.”

The Football Association is likely to ask Spurs for their observations after missiles were thrown at Kepa Arrizabalaga, Chelsea’s goalkeeper. The toxic atmosphere in the stands dragged attention away from a fine performance from Chelsea, who sealed the win with to two first-half goals from Willian.

“It’s difficult to see this situation. We are there, we are inside the pitch to do our job and to do our best. It’s difficult when these situations happen. The players have to stay concentrated and leave the decision to the referee and we did it.”