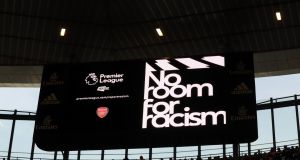 Hate crime incidents were reported in relation to 287 matches across the UK in the 2019-20 season. Photograph: Catherine Ivill/Getty

Hate crime incidents were reported in relation to 287 matches across the UK in the 2019-20 season, a Home Office report states.

For the first time the data covers verified incidents of hate crime which were related to a particular fixture and were reported to the UK Football Policing Unit by anti-discrimination body Kick It Out and the Football Association.

It also includes online incidents related to particular matches for the first time.

The report said 75 per cent of the incidents related to race, though the incidents reported often included more than one form of discrimination. In addition to the 214 where race featured, 78 referenced sexual identity, 23 mentioned religion, three related to disability and one to gender identity.

The match figures cannot be compared to previous seasons, the report said, because in the past these incidents have only been recorded at the discretion of the police force receiving the report.

But the data showed that the number of arrests for racist or indecent chanting more than doubled from 2018-19 to 2019-20 — from 14 to 35 — even though 319 matches were cancelled due to the coronavirus pandemic and a further 227 were played behind closed doors.

A Home Office spokesperson said: “Hate crime has no place in football or anywhere else and we must all come together to confront it.

“The increase shown in these statistics is partly down to better recording and awareness, but we have no complacency in stamping out this evil from the game.

“We are bringing forward legislation to force social media companies to remove racist, homophobic and anti-Semitic abuse and we are working closer than ever before with the football authorities to bring perpetrators to justice.”

“We want to see this behaviour eradicated from football,” he said in a statement.

“We are working closely with Kick it Out, the Premier League and other partners, with a concerted effort to tackle hate crime both in the stadium and online.

“It is important the clubs and the leagues continue to ensure the police are made aware of all incidents so local forces can work with them to tackle the incidents as they occur.

“We are also working to help tackle the causes of hate crime, with a mixture of education, helping those involved to understand the harm it causes, and diversionary activities for young supporters.

“This will remain a focus until we are able to eliminate this vile behaviour and ensure a safe and friendly space for everyone to support and enjoy football.”