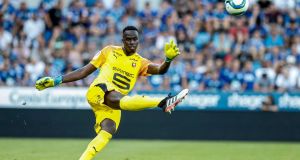 Senegal international Mendy will provide competition for Kepa Arrizabalaga, who has struggled for form and confidence at Stamford Bridge.

The 28-year-old told the Blues’ website: “I am so excited to be joining Chelsea. It’s a dream for me to be a part of this exciting squad and to work with (manager) Frank Lampard and all of his coaching staff.

“I look forward to meeting my team-mates and can’t wait to get started.”

The 6ft 5in keeper has moved to west London in a deal rising to £20million.

Chelsea director Marina Granovskaia said: “As soon as Petr Cech (technical and performance advisor) and our technical team identified Edouard as the most suitable goalkeeper to complement our existing group, there was only one player we wanted to bring in.

“Edouard arrives following a season of real success with Rennes, he is ambitious for more, and we welcome him to our club.‘

Kepa, a £72million signing from Athletic Bilbao in 2018, has struggled to convince Lampard he is capable of being Chelsea’s long-term number one.

After being dropped from the team in favour of Willy Caballero for spells last season, the Spain international produced his latest costly mistake during Sunday’s 2-0 Premier League loss to Liverpool.

The Blues, who thrashed Barnsley 6-0 in the Carabao Cup on Wednesday, will attempt to bounce back from defeat to Jurgen Klopp’s champions at West Brom on Saturday.

Lampard revealed ahead of the Tykes game that Mendy was undergoing a medical and highlighted the influence of Cech, whom Chelsea signed from Rennes in 2004, on the deal.

“With Mendy coming in, it’s more competition so every reaction will have to be positive around that for Kepa and for Mendy to push to try and play in this team,” said Lampard on Tuesday.

“We know the standards that are required of a goalkepeer in this team and we have to push for that.

“Petr was important in that because goalkeeper is a very particular position and he was the best in the world at that position for a long time, so he’s certainly had a big say in this situation from my point of view.

“I lean heavily on him when it comes to the goalkeepers day-to-day and planning for the future — so he was very influential.”