City and United at a crossroads: who will go on to dominate? 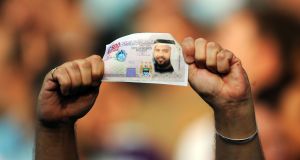 Manchester City have the richest owner in Sheikh Mansour; United, however, boast a worldwide reach as Ed Woodward continues to grow the business

Pep Guardiola, Manchester City, head coach are six words to delight all City fans and make every Manchester United devotee shiver. How the Catalan will revamp the side and City’s style of play is a must-watch next season and when he July 1st the fascination begins.

There is a valid question concerning how good Guardiola will be in the Premier League, arguably a far more demanding test than Spain, where he coached Barcelona, or Germany, where he is in charge of Bayern Munich.

At Barça, Guardiola’s was a gilded XI that contained Xavi Hernández, Andrés Iniesta, Dani Alves, Carles Puyol, Gerard Piqué and Sergio Busquets and was decorated by one of the greatest ever players in Lionel Messi. Without such talents at Bayern, Guardiola has failed to win the Champions League.

What to do with Louis van Gaal is at the heart of the club’s problems. Each time the Dutchman suffers a defeat the doubts regarding his future re-emerge. The latest came on Thursday when Liverpool knocked United out of the Europa League. Part of the routine here is for Van Gaal to cuff away any questions about him staying into his final year and so it was again.

Each time United go on a mini-run, as they did when winning four games on the bounce before losing at West Bromwich Albion on March 6th, a sense mushrooms that Van Gaal could be granted the full run of his three-year contract.

If the Dutchman remains in charge in August expect the reaction to range from outrage (most fans) to puzzlement (the media). There is an ideal candidate out of work and who wants the job, but Ed Woodward has ignored José Mourinho, which is hardly helping the executive vice-chairman’s popularity. Woodward may yet call, however, and if he does, expect the Manchester football scene to be rather lively next season as this pair of alpha males are not overly keen on each other.

Verdict: City have a considerable edge.

The powderpuff title challenge is the latest illustration of how age and attrition is catching up with the majority of the squad. Vincent Kompany (29), Yaya Touré (32), David Silva (30), and even the 27-year-old Sergio Agüero have to manage various maladies and are seemingly unable to avoid injury. Kompany suffered his 14th calf injury in Tuesday’s goalless draw with Dynamo Kyiv and Guardiola has to think hard about whether the Belgian can be the emblem of his brave new City world.

Less acknowledged is the state of the strata of players below this elite band. Fernandinho (30), Bacary Sagna (33), Pablo Zabaleta (31), Aleksandar Kolarov (30), Gaël Clichy (30), Martín Demichelis (35), and Jesús Navas (30), are all in the footballer’s decade of decline.

Joe Hart (27), and Kevin De Bruyne (24) are the club’s only two high-end players who are young and do not have ongoing injury concerns. Raheem Sterling (21) is pushing to be considered in the bracket but is yet to fully convince. There is no question that the make-up of the playing personnel is Guardiola’s prime challenge.

Van Gaal has invested £250 million-plus but the squad remains lopsided. He states the emergence of young players will affect the summer transfer strategy. In February’s final week debuts were given to Donald Love, Joe Riley, Marcus Rashford, Tim Fosu-Mensah and James Weir, following Cameron Borthwick-Jackson and Guillermo Varela earlier in the season. It is too soon to make definitive judgments but Borthwick-Jackson, Rashford, Fosu-Mensah and Varela appear early favourites to establish themselves as squad members, at least. To have four home-reared players emerge is a bonus but gaping holes remain.

Anthony Martial is enjoying a fine first campaign but as Wayne Rooney fades the Frenchman requires the support of a top-level striker. Morgan Schneiderlin has been given no real chance to establish himself by Van Gaal – he was again ignored against Liverpool. Another central midfielder is required. Bastian Schweinsteiger was thrown on at Anfield though his fitness is suspect, while Michael Carrick is entering the winter of his career.

Finally, the ever-excellent David de Gea may depart for Real Madrid in the close season. If so, this will cause a headache for whoever is in charge.

There is a desire at the City Football Academy to ensure that Guardiola’s arrival does not make the club too Spanish. The 45-year-old will join Txiki Begiristain, the sporting director, and the chief executive, Ferran Soriano, meaning the three most powerful men on the ground will be from Spain. The hope is that what has traditionally made City the club it is will not be diluted.

Woodward is far more important than Van Gaal or any future manager. The Glazers are now reaping the riches they purchased the club for and Woodward is the lone executive responsible for this. His task of making the football side of his role slick remains a work in progress. The reluctance to sack Van Gaal has been a counterintuitive move. Whatever the motive, to ignore Mourinho is a powerplay and a clear illustration the owners fully trust Woodward.

Verdict: Jury out on both clubs.

Manchester City have the richer owner in Sheikh Mansour, whose fortune is more than £20 billion, and with Financial Fair Play regulations relaxed there is more scope to invest. There is also the £265 million received from a Chinese consortium that bought 13 per cent of the City Football Group, a move sanctioned by the hierarchy to open up a front in a strategically key country. When the deal was announced al-Mubarak said it will “leverage the incredible potential that exists in China”.

The foray into China follows the acquisitions of New York City FC, Melbourne City FC and of a minority share in Yokohama F Marinos of the Japanese J-League. They boast considerable finance.

The Glazers are not Sheikh Mansour. The Americans operate an ownership model that is very different. This features a heavy leveraged debt – gradually being reduced – but draws an ever-bulging war-chest as United become a footballing Walmart, its dizzying number of sponsors including manufacturers of crisps, beer, paint, tyres, food, footwear, watchmakers, banks, sports clothing and mobile communications.

United has a worldwide reach the envy of every club. Woodward continues to grow the business. United view City’s approach of having satellite clubs as a quasi-franchise model that weakens their rivals’ brand. United’s ploy is to engage myriad regional partners who pay a base fee – of, say, around £1 million – to use the famous name to help promote their product. This is proving a cash-cow and when blue-chip sponsors are factored in – the record £750 million, 10-year Adidas kit-deal is the headline agreement – United will remain ahead of competitors.

The £200 million CFA and the decisions of former United luminaries Robin van Persie, Darren Fletcher and Phil Neville to send their sons to their alma mater’s great rival show Manchester’s blue zone now attracts top local talent. But how many youth team players can become an established first-team force? The last was Micah Richards, 11 years ago.

There are concerns that the cub of Duncan Edwards, George Best and Ryan Giggs is being left behind. It boasts no bespoke stadium for juniors, and has a staff of largely part-time scouts. The culture of promoting bright young things into the first XI is ingrained, though. The statistic that a home-reared footballer has been in every matchday squad since 1937 is evidence of this.

Nicky Butt is now in charge of the academy and Giggs, who may one day take the senior job, is another former Class of 92 member who understands what can happen when opportunity bangs for any youngster.