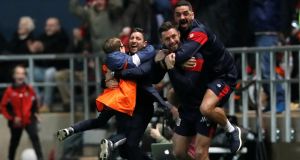 Bristol City boss Lee Johnson is ready for the “amazing” prospect of tackling runaway Premier League leaders Manchester City in the Carabao Cup semi-finals. Chelsea will meet Arsenal in the other last four clash with the ties to be played over two legs in the weeks commencing January 8th and January 22nd.

Bristol City’s reward for knocking out holders Manchester United at Ashton Gate are home and away legs with City next month.

“It keeps everybody talking, it keeps the city buzzing, and all of the press that the players get, they deserve,” Johnson said.

“Manchester City, personally, have been fantastic with me ever since I have been a manager. People like Brian Marwood have accepted me in behind the scenes there, and allowed me to visit various clubs in their group.

“It will be amazing for the players, first and foremost, to test themselves, but also for myself and the fans to hopefully have two great days.

“From when I was (manager) at Oldham, which was just around the corner, I’ve been let in on a number of occasions. It (Manchester City) is a beast of an organisation, but it is so fascinating.

“You see the football that they play — it’s unbelievable to watch.”

Korey Smith’s stoppage-time strike secured a stunning 2-1 victory for City as they took a fourth Premier League scalp in the Carabao Cup this term, with United going the same way as Watford, Stoke and Crystal Palace.

Johnson celebrated by swinging an equally jubilant ball-boy in the air, and he added: “Someone said I’d picked up my bigger brother! I didn’t know what to do. Laugh, cry, cuddle each other, no-one knew.

“I was going to run on the pitch, then realised I couldn’t. So it was great to see him (the ball boy). I needed to celebrate with someone.

“To beat Manchester United at home is a historic occasion, and that Korey Smith goal at the end will live in the memory for many generations.

“You don’t beat Manchester United if you are Bristol City unless every single player is doing a man and a half’s job. These players now will have a bond forever.

“We have beaten four Premier League teams now. It’s Roy of the Rovers.”

United boss Jose Mourinho was in philosophical mood after seeing his time undone by Smith’s winner that sent most of a 26,000 crowd into raptures.

“They were a bit lucky, but they fought a lot to be lucky,” Mourinho told Sky Sports.

“In the first-half we lacked the intensity that they had, and when I say intensity I say not just physical, I say also mentally. For some of us, it was just one more day in the office, probably a day that some of them they don’t even want to come to the office.

“For the Bristol boys it was a big, big day for them, and in the first-half you could see that.”

Rory McIlroy admits Portrush nightmare was catalyst for his return to the top 21:00
FAI moves to defer portion of salaries as Fifa ponders cash support 20:30
NFL votes to expand postseason following cancelled annual meeting 20:21
‘For 25 minutes I ran out of oxygen’: Pepe Reina on his coronavirus battle 20:06
World Rugby aiming to outline range of options by end of April 19:03