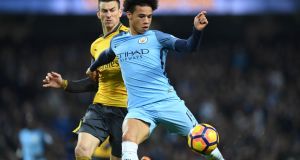 Arsene Wenger felt both of Manchester City’s goals should have been disallowed for offside as Arsenal surrendered the lead to lose 2-1 at the Etihad Stadium.

Theo Walcott opened the scoring early on with the Gunners’ only shot on target before goals from Leroy Sane and Raheem Sterling turned the game in City’s favour.

Germany international Sane looked to be offside before racing clear to bag his first goal for the club, while David Silva was standing ahead of the Arsenal backline when Sterling’s low shot flashed past Gunners goalkeeper Petr Cech.

Wenger told Sky Sports: “I feel we dropped physically in the second half, in the first half we looked always dangerous and sharp.

“And on top of that the decisions went against us, the two goals are two offside goals and in a game of that stature, I feel enough is enough for us because we got some bad decisions for the whole season and today I looked at the goals – both are offside.

“The second one is five yards offside. But what can I do? We have to live with that and look at ourselves and analyse why we lost the game.”

Cech admitted he was unsighted for City’s winner but did not know whether Silva was the man who blocked his view.

“I have to say that there were players in front of the goal so I didn’t see the shot and there were people running across and I don’t know if one of them was David Silva or not,” Cech said.

“But, as I said, I didn’t see the ball because it was behind the players.”

City boss Guardiola felt his team merited the three points and was pleased to see home fans remain until the final whistle.

The result moves the Spaniard’s side above their opponents and Liverpool into second, while the Gunners drop to fourth.

“We make a good game from the beginning to the end,” Guardiola said. “We deserve our win.

“Of course it’s not easy in the Premier League when one team scores first, it’s not easy to make a good comeback but I’m satisfied.