Alexis Sanchez can take Man United back to the top

Chilean has similarities to Tevez, a key man in the 2007-08 side that conquered Europe 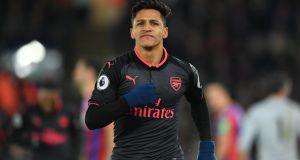 Alexis Sanchez’s arrival can help to propel Manchester United to a strong finish and light up the Champions League campaign that they will resume next month with a last-16 tie against Sevilla. Photograph: Ben Stansall/AFP/Getty Images

In Alexis Sanchez, Jose Mourinho is about to acquire another world-class player as he plots to make Manchester United an elite domestic and European force again. Manchester City hold a 12-point advantage over Mourinho’s team so a credible title challenge will have to wait until next season. Yet Sanchez’s arrival can help to propel United to a strong finish and light up the Champions League campaign that they will resume next month with a last-16 tie against Sevilla.

This is why Mourinho was hired: to make United England’s dominant side once more and return them to the rank of continental heavyweights. To achieve this the XI must be decorated with footballers who can consistently turn matches. Sanchez’s arrival – his switch from Arsenal to United is expected to be completed by Tuesday – completes a triumvirate of these, as he joins David de Gea, a near-peerless goalkeeper, and Paul Pogba, one of the game’s pre-eminent midfielders. Sanchez’s preferred starting position may be on the left but, as he will be United’s focal point, the Chilean’s arrival will mean the team have a formidable spine.

This is certainly the thinking behind the deal for a 29-year-old whose contract expires in July. Theory does not always translate into practice, of course.

How Mourinho harnesses Sanchez within the side is imperative, as is the way he integrates the forward into a squad the Portuguese describes as his happiest.

Those who pigeonhole Mourinho as a park-the-bus advocate will wonder how he will deploy Sanchez. The analysis may run that the player’s penchant for aiming at the opposition’s jugular will be shackled by a managerial directive to track back and so reduce Sanchez to a factotum in thrall to “team ethic”.

Mourinho’s answer might be to point at how his glittering career has been built on an ability to transform playing resources into trophy-winning units. Last season’s League Cup and Europa League triumphs were achieved with a functional team that had a 35-year-old, Zlatan Ibrahimovic, as its spearhead, until the Swede’s injury in April.

Yet when able to call on those with an X-factor Mourinho allows them to flourish: his finest sides have featured footballers of verve and pace who expressed themselves. Think Arjen Robben of his double Premier League winners Chelsea (2004-05 and 2005-06) and Cristiano Ronaldo of Real Madrid’s record-breaking 2011-12 La Liga champions. So it would be a surprise if the manager’s intent were not for Sanchez to enhance United in similar fashion.

Mourinho’s opening season at United featured complaints at the lack of firepower in support of Ibrahimovic, who scored 27 times. While Anthony Martial – who netted the winner against Burnley by clinically firing home at the start of the second half after his team had failed to register a single shot on target in the first period – was returning eight goals in 41 appearances, Marcus Rashford 11 in 52, Juan Mata 10 in 42 and Jesse Lingard five in 40, Sanchez was bagging 30 in 51 games for Arsenal.

With Romelu Lukaku proving as prolific this year as Ibrahimovic was last – the Belgian has 16 in 31 – if Sanchez can contribute more personal goal gluts, United will hope to challenge the division’s most prolific scorers, City and Liverpool. The leaders have 70 and the Merseyside club 54, with United’s total the third-highest at 49. Sanchez’s numbers offer further encouragement. The 2014-15 campaign, the first after his £30 million move from Barcelona, ended with 25 goals in 51 appearances, before 17 in 41 in 2015-16.

Sanchez’s ability to convert speed and directness into a creative end-product is also required. Rashford and Martial are pacy but blunder up too many blind alleys. The manager’s fragile trust in them is signalled by their continual rotation. Sanchez makes better choices and rarely has an off-day.

His is a kind of restless reliability that casts him in the mould of Carlos Tevez, a key member of arguably United’s finest side of the Premier League era: the 2007-08 vintage that defended the title and won the Champions League. Tevez offered United an edge and, though Sanchez is not as feisty, he is as relentless as his fellow South American.

There remains a question over United’s number 10 berth, and Mourinho may try Sanchez in a position he deemed Henrikh Mkhitaryan not good enough for. Lingard’s run of nine goals in 11 appearances has come, in the main, when operating in this role, so he could prove the long-term solution.

If there is no doubt, then, that Sanchez the footballer is a stellar asset, what of Sanchez the team-mate? In the weeks before he left Arsenal, his desire to do so caused unrest, with his goal against Crystal Palace in late December not celebrated by all of the side.

A willingness to jump from Manchester City, who pursued him for nearly a year, to United at the last minute may also provoke accusations of being a mercenary. The charge would be that Sanchez is more interested in the £300,000-plus a week earned at United than in being the more modestly remunerated Premier League champion (and who knows what else) he almost certainly would have become at City.

But Mourinho is no jam-tomorrow coach. He is an arch-pragmatist intent on fielding XIs that should be winning machines. He is at a club about to go half a decade since their last domestic crown. On this basis Mourinho will do all to ensure Sanchez buys into the spirit he speaks of and a squad desperate to end the title drought will surely welcome him, too.