A long time before China can compete with Premier League, says Wenger 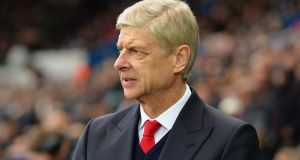 Arsenal manager Arsène Wenger welcomes the of growth in Chinese soccer but says “the culture of professional football is not there.” Photograph: Tony Marshall/Getty Images. 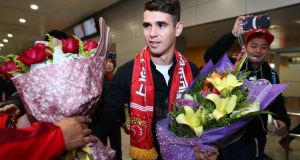 Arsène Wenger has praised the growth in Chinese football and hopes India will soon “come to the game” as well but says it will be a long time before either can truly compete with the Premier League.

The January transfer window has been dominated by stories linking the biggest stars in the Premier League – from Diego Costa to Dimitri Payet – with big-money moves to China. Wenger believes it will take years for China to build a football culture that can properly compete with those in Europe but warns of “danger” should China-sized salaries become the norm.

“That combination is best in England right now. But professional football in England was created 150 years ago. And we still struggle, you know. I believe it’s a slow process of creating a football culture.

“So it will take time. But China has moved forward. It tries to promote football and I’m happy that football has become popular in China. I also expect India to come to the game too you know. I hope it will happen.”

Wenger’s relaxed attitude contrasts with that of many commentators who see deals such as the €60m, €463,000-a-week transfer of Oscar from Chelsea to Shanghai SIPG as distorting the transfer market. Furthermore, even the suggestion of an approach from a Chinese club has been enough to cause friction between players and clubs, as is believed to have been the case with Diego Costa at Chelsea.

Wenger, however, believes such offers become problematic only if they constitute a benchmark for the game as a whole. “Overall the players have everything today to be more happy than 20 years ago, never mind 40,” Wenger said. “They are treated very well, they have a fantastic income. They have freedom of movement which we didn’t have.

“The danger is that players start asking for money that’s unrealistic in the Premier League. If Chinese ranges become the benchmark then you cannot compete with that. But we do not know whether, in 10 years’ time, China will still be doing it. Sometimes, if it’s a political decision, that can change.”

Wenger’s instincts appear to have been borne out. Reports suggest that regulations governing the Chinese Super League have been changed, with 18 new rules being put in place by the Chinese government’s official sporting body. One such rule would see ‘ultra-high-worth’ signings being heavily taxed. The number of foreign nationals allowed in any CSL XI is being reduced from four to three. Guardian Service