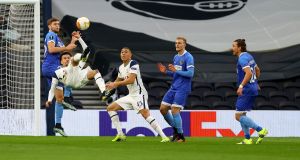 It was a night when José Mourinho wanted victory, a cohesive performance and a confidence booster for the critical run of Premier League fixtures that comes next. The Tottenham manager got the former, even if there was little real doubt he would against the side that sits fifth in the Austrian Bundesliga.

As for the rest, it was not Spurs at their most fluid and energetic, although it is difficult to put bodies on the line when a tie is effectively over after a 4-1 first-leg away win. But there was the tonic of Dele Alli’s cutting edge and the latest evidence that Gareth Bale can feel a return of the old rhythms.

Dele added a magnificent overhead kick to his back catalogue of classic goals while he contributed two assists; the first for Carlos Vinícius and the second for Bale, who had come on as a 69th-minute substitute. Bale swept on to Alli’s pass shortly after his introduction and bent a first-time left-footer into the far, top corner.

Mourinho introduced three youngsters in the closing stages and one of them, Dane Scarlett, won the ball high up for Vinícius to add his second and Spurs’s fourth to seal a cake-walk into the Europa League last 16. There were debuts for Marcel Lavinier at right-back and Nile John in midfield. Spurs will face far tougher opposition in the next round but, before that, it is Burnley, Fulham and Crystal Palace in the league.

Mourinho’s starting lineup was always going to be a talking point and there was a focus not only on who he selected but on who he left out. Bale’s absence at the outset felt significant. The winger, who has shown flickers of form of late, had started the previous seven ties in the competition. Was Mourinho holding him back for Burnley? The same logic could be applied to Lucas Moura. Harry Kane and Son Heung-min were given the night off.

Alli’s showstopper came early and, when he touched Matt Doherty’s cross down into the ground with his studs and watched it bounce high, he looked in control of the situation, his mind making the calculations in a heart-beat. It was a difficult skill to execute, the overhead kick with his back to goal close to the penalty spot; the angle of connection to direct the ball inside the goalkeeper’s right-hand post needed to be perfect. It was.

Spurs made heavy weather of getting through Wolfsberger in the first half, with Vinícius blowing a one-on-one in the 44th minute, having fastened on to Erik Lamela’s throughball and danced around the goalkeeper with a lovely move. He could not get the needed precision on the finish, which he took with his left foot from the left-hand side, and Gustav Henriksson slid back to clear off the line.

To Mourinho’s irritation, there were moments of defensive looseness from his players and he shouted accusingly at them when Michael Liendl was allowed to touch goalwards from a low Michael Novak cross on 35 minutes. Joe Hart made an easy save. The substitute, Dejan Joveljic, would be wasteful with two chances after the interval.

Mourinho was out well before his players for the second half, scribbling down notes from his seat in the dugout. He wanted to see greater intensity but there would be a let-off before things got better. Cheikhou Dieng chased a long ball in on goal and he had the position on Eric Dier, who leaned into him just outside the area, sending him over. It looked like a foul and a possible red card for Dier.

To Wolfsberger’s fury, there was no whistle and, moments later Spurs were 2-0 up when Alli dropped a lovely cross over Luka Lochoshvili for Vinicius to head down and in at the far post. It was the prompt for them to ease to victory. Lamela and Alli went close; Bale and Vinicius did not miss.