Tottenham have sold out stadium for Monaco clash 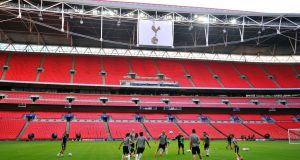 AS Monaco players train at Wembley ahead of their Champions League clash with Tottenham Hotspur. Photograph: Afp

For Mauricio Pochettino, the devil is always in the detail. Tottenham Hotspur will begin a new chapter in their history when they step out to face Monaco at Wembley tonight and, for the club’s manager, it has meant a fresh set of markings at the training ground.

Pochettino has highlighted in the past how White Hart Lane is one of the smallest playing surfaces in the Premier League and there have been theories about how it can stifle Tottenham against opponents who sit deep and mass players behind the ball.

The Wembley pitch is five metres longer and two metres wider, which may not sound like much but, when it is put another way, the difference is 545sq/m – which does sound significant.

The bottom line is Pochettino inhabits a world in which the finest of margins can make the difference. And so, in the countdown to Tottenham’s big night, he has trained on two pitches that replicate the 105m x 69m dimensions of the national stadium. They have alternated between them, Pochettino said, in order to look after the grass.

“Wembley is a little bit bigger and this can help the teams that play along the grass and keep possession,” Pochettino said. “Teams that build from the back, like us, have more space, more possibility to play and it’s more difficult for the opponent to press you. We believe in the way we play and this is a good chance to play on a big pitch. We need to adapt our game.”

The club is making every effort to smooth the transition; to create a home from home while White Hart Lane is deemed to fall foul of Uefa’s regulations because of building work.

Nothing will truly prepare Pochettino and his players for the moment when they depart the dressing room to be assaulted by the colour and noise of what could be the largest home attendance in English club history. Tottenham anticipate around 85,000; the record is the 84,467 who watched Manchester City’s FA Cup sixth-round tie against Stoke City at Maine Road in 1934.

“I can’t really imagine what will happen in the moment when we walk from the tunnel to the pitch,” Pochettino said. “It will be an emotional moment.”

Wembley will be down on its 90,000 capacity because of Uefa requirements but it is a sellout and, with Monaco having been given a tiny proportion of the tickets, it stands to be quite the occasion for those who love Tottenham.

When Arsenal staged their Champions League ties at Wembley, between 1998 and 2000, Arsène Wenger described it as being a “nightmare”.

The Arsenal manager has said the grandest stage in English football served to give opponents a lift. Tottenham will have to contend with that, too, but, right now optimism holds sway. Guardian Service